The Real Truth About Potatoes (Are They Really Bad?) 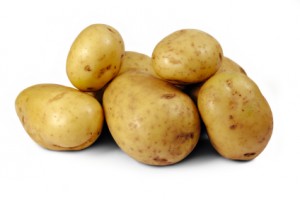 Potatoes certainly receive mixed reviews- they’re vegetables, which are healthy, but they’re also full of starch, which breaks down into sugar during digestion. As a starch, potatoes are made up of long chains of simple sugar molecules, which break down into individual glucose molecules in the body.

People who are on a fat loss diet often avoid potatoes because potatoes are high in carbohydrate that the body digests rapidly and causing blood sugar level to surge and converts to fat. However, potatoes are indeed a vegetable, and they contain a lot of healthy things like antioxidants. Vitamin B3, Vitamin B6, Vitamin C, potassium, manganese, phosphorus, and copper, just to name a few. The white potato actually has everything your body needs except for Vitamin D and Vitamin A.

Potatoes happen to be the #1 most consumed vegetable in America, and are extremely popular worldwide (they’re the 4th most consumed worldwide). They’re hardy,they’re easy to grow and to store, they’re inexpensive, and they have key nutrients. There are many types of potatoes that can be consumed in a variety of ways, and potatoes have been a staple in many cultures throughout millennia, such as in Ireland and in Peru. Potatoes have historically beena great food source during scarce times. Many scientific studies have shown that potatoes can be useful for maintaining a healthy body, especially for the cardiovascular system.

As most of us know, when food is processed, it usually loses its nutrients. Think of all of the ways you’ve seen potatoes served: French fries, mashed potatoes, chips, twice baked potatoes, et cetera. All of these potato produces have been processed and have had unhealthy ingredients added to them, such as salt, bacon, preservatives, and oils. The bottom line is that potatoes can be part of a healthy diet, but not the way American culture portrays them. Below, we’ll discuss why common potato products are bad for us, and then go over how potatoes can actually be good for us after all.

Fries are made with partially hydrogenated vegetable oil, which is often high in saturated and trans fats. This kind of oil is awful for the heart and promotes inflammation throughout the body. The potato is brought to very high temperatures multiple times during the production process, is exposed to harmful oils, and along the way, it loses most to all of its original nutrients. On top of that, the fries are often coated with preservatives and salt, making them even less healthy.

Instant mashed potatoes are often boxes full of artificial chemicals. There is some potato in there, but much of it is preservatives, trans fats, emulsifiers, and even known carcinogens like BHA. Frozen mashed potatoes can be just as disastrous nutritionally. These artificial products are not worth eating, and the potato that they do contain is processed, meaning that it has lost at least some of its original nutrients. 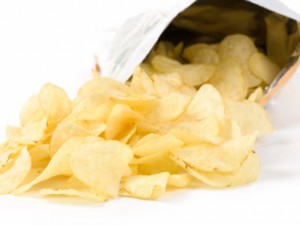 Almost everyone knows that potato chips are unhealthy. Here’s an example of some of the ingredients in a bag of sour cream and onion potato chips. The first three are potatoes, vegetable oil, and salt. Others on the list are MSG, soybean oil, guar gum, and modified cornstarch, all of which have potential negative health implications. A serving of twelve chips – keeping in mind that practically no one eats just twelve chips in one sitting – contains 160 calories, 10g of fat, 270mg of sodium, and 16g of carbohydrates.

This type of potato product isn’t quite as well-known as French fries or potato chips, but it is yet another way that American culture has destroyed the nutritional value of potatoes. It is a very popular side dish in American restaurants, and is sometimes included in family meals. You begin with a whole potato, and scoop out the potato from the shell. The potato is mashed up and mixed with ingredients such as bacon, sour cream, butter, cheese, and vegetable oils, making it hardly worth eating.

1) The healthiest way to eat a potato is whole, with the skin on it, baked or raw. Some types of potatoes lose water-soluble nutrients easily when boiled. It’s recommended that, when boiling potatoes, you cook the whole, uncut potato with the skin on to reduce the amount of nutrients lost. Baking and roasting are two of the most effective ways to cook potatoes.

3) For a potato snack that doesn’t pack a destructive punch, it’s easy to make your own potato chips at home, where you control exactly what goes into them. There are hundreds of ways that you can do it, but one simple way is to thinly slice up some potatoes, add a bit of healthy oil to both sides (coconut oil and olive oil are two good options), and bake them.

You can add some salt once they’re done baking, but don’t add too much! Sea salt and other types of salt that are closer to their natural form are healthier than white table salt is, and contain a lot more minerals, too. If you like, it’s a good idea to add some herbs and spices, such as garlic and turmeric, to increase the nutritional value of the homemade chips.

4) Potatoes can easily be incorporated into casseroles. Sweet potato and white potato are particularly common here. Baked potatoes taste great in casseroles, and if they are combined with, for example, spinach, whole grain rice, hormone and antibiotic-free chicken, and herbs and spices, it can make a healthy and delicious meal.

5) Some miscellaneous ingredients that can be added to potato based meals and snacks to make them healthier and tastier include: garlic, turmeric, cumin, onion powder, vinegar, chives, basil, rosemary, and peppers.

So, potatoes can be super healthy, but also detrimental to our health. Just like with most other foods, it all depends on how heavily processed they are. Store bought and pre-packaged potato products will pretty much always be less healthy than what you could make at home.

Overall, eating potatoes in moderation is the best idea. When you go out to a restaurant, beware of twice baked potatoes and similar options, which are usually drenched in butters, oils, and other ingredients that make them taste too good to be true. It is and always has been a good idea to steer clear of potato chips and French fries, especially cheap commercial varieties like those from McDonald’s. (Did you know that McDonald’s fries technically contain silly putty?)

On the plus side, at least you can try making healthier versions at home for a tasty snack that won’t increase your risk of heart attack. If you are on a fat loss diet, limiting potato intake isn’t a bad idea, as it does break down into sugar molecules in your body. Just remember that carbs are perfectly okay when they bring along dozens of essential nutrients with them!

Instead of avoiding natural and healthy potatoes to try to lose weight, you should look into other foods that really make you fat and unhealthy. Go to next page to watch the 4 Foods to NEVER eat for Breakfast <<

Do you look out for these ingredients in the nutrition label? Which wonderful friends in your life would appreciate the truth about potatoes?