Why You Should NEVER Eat Fried Food 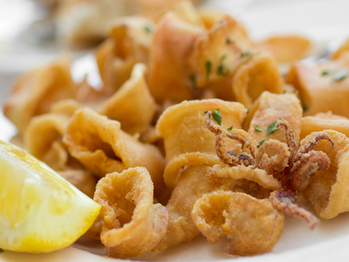 Fried food at restaurants is often a health disaster. Most people have been warned away from eating fried food for one reason or another, all revolving around the fact that it is simply bad for you.

The problem with eating fried food outside of your home is that restaurants don’t have the incentive to invest in healthier types of oils, and that the way things are cooked is out of your control.

Below are 5 key reasons of why eating fried foods at restaurants or buying pre-packaged fried foods can be a very unhealthy choice.

A study published in the Journal of the American Academy of Pediatrics found a positive correlation between how often children eat fried foods and their body mass indexes. On top of that, those who ate fried foods often also consumed sugary foods and soda more often, had higher trans-fat and calorie intakes, and ate fruits and vegetables less often. The unfortunate psychological fact is that eating unhealthy foods encourages us to eat more unhealthy foods.

The Effects of Overcooking

Fried foods are often overcooked and/or cooked at high temperatures, and eating very cooked food actually has negative effects on the body. It makes sense that the nutrients in the food become less digestible when overcooked; researchers at the University of California found that overcooked food stays in the digestive tract longer than uncooked or lightly cooked food does. In simple terms, it seems that the body doesn’t recognize the food as food due to just how altered the chemical structures are.

The food stays in the digestive tract longer as your body tries to get nutrients out of it. In many cases when this occurs, it is a highly processed food product that contains toxins. The longer the food stays in your body, the more effect the toxins will have.

It is also true that certain chemicals and toxins begin to develop in the food when it is being cooked for too long, and that the chemical structure of the food changes at high temperatures, including the temperatures that foods are normally fried at.

Again, there are ways that you can make fried food at home that aren’t so bad, and some that are even rather healthy. However, restaurants have the incentive to use the cheapest kinds of oil that they can and to re-use that oil over and over in industrial fryers.

Being frequently heated to high temperatures, allowed to cool, then heated up again is not good for the oil, and it even sounds gross to think that you’ve eaten food fried in old oil. Re-heating creates new chemical compounds in the oil, some of which are pretty awful for our bodies.

At least one of these falls into a group called aldehydes; this is a broad chemical group, but contains quite a few health bad guys. Some aldehydes are linked to cancer and neurodegenerative diseases like Alzheimer’s.

Researchers at the University of the Basque Country in Spain found that when oils are reheated, the fatty acids begin to break down and produce toxic aldehydes.

On another note, some of the most commonly used frying oils are either genetically modified or synthetic and often contain pesticides, including canola oil. On top of all of the other cons of fried food, canola oil in general is simply bad for you.

Free radicals are highly reactive molecules that can initiate chain reactions of chemical disruption, destroying cell membranes, enzymes, and DNA. They can cause a wide range of health issues such as heart disease, neuro-degenerative diseases like dementia and Alzheimer’s, inflammation, and even aging.

The Risk of Cancer

All right, so just about everything these days besides raw food comes with a risk of cancer, but that doesn’t mean that it should be dismissed. According to the Fred Hutchinson Cancer Research Center, frequent consumption of fried foods has been linked to an increased risk of prostate cancer (probably among other types, too).

They propose that your risk starts to grow if you eat fried foods more than once a week, but that’s at least a little bit arbitrary. Others have suggested that the negative effects on the body caused by eating fried foods can be partially offset by eating healthy foods, or more specifically, raw foods like fruits and vegetables.

The study mentioned earlier on that looked at how eating fried or overcooked foods affects the body also found that those who consume healthy foods at the same time as fried foods have fewer harmful effects.

– Fry your own food at home if you really want fried food. In almost all cases, what you make at home is healthier that what you get at a restaurant as long as make an effort. Healthier types of oils include coconut oil, olive oil, and avocado oil.

– Choose non-fried alternatives when eating out. Grilled chicken is a much better alternative to fried chicken, and don’t even both with the fried mozzarella sticks – they may be tasty, but they’re packed with unhealthy junk.

– Sautéing food in a pan can create a similar taste to fried food, yet is much healthier. Toss out the fried fish sticks and replace them with wild-caught salmon sautéed in olive oil and lemon juice – yum!

Although these 3 alternatives can be better choices compared to fried food, keeping you healthy and strong…

On the next page, I want to share with you how you can boost your body with the ‘most powerful healing nutrient known to man’.

Do you love fried food? Share with us in the comments below whether if you feel any negative effect on your body after eating them.