Is Your Organic Milk Really Organic?

September 11, 2017 by staff content in Health News with 0 Comments 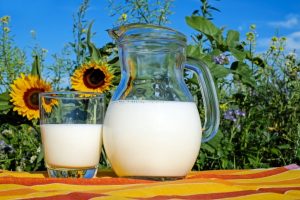 You can find almost any food, whether produce or processed, in an “organic” version.

So what does “organic” mean? According to the US Department of Agriculture (USDA), “USDA certified organic foods are grown and processed according to federal guidelines addressing, among many factors, soil quality, animal raising practices, pest and weed control, and use of additives.

Organic producers rely on natural substances and physical, mechanical, or biologically based farming methods to the fullest extent possible.”

Essentially, food production is held to a higher standard in order to earn the coveted “organic” label.

With this in mind, let’s talk about the difference between conventional and organic milk.

Because milk is an animal byproduct, many factors must be taken into consideration when determining if it may be labeled as organic.

Again, according to the USDA, “The USDA organic label on dairy or meat products means that the animals from which it originated were raised in living conditions that accommodated their natural behaviors without being administered hormones or antibiotics, and while grazing on pasture grown on healthy soil.

Then during processing, the meat or dairy product was handled in a facility that was inspected by an organic certifier and processed without any artificial colors, preservatives, or flavors before being packaged to avoid contact with any prohibited, nonorganic substances.”

Practically, this means several things. First, organic food is usually fresher because preservatives are not one of the ingredients. Fewer and more natural pesticides are used.

This means that all fungicides, insecticides and herbicides are not used because they tend to remain on and in the food.

Growth hormones, antibiotics and animal byproducts in their food are all prohibited for cows providing organic milk.

Antibiotics given regularly to livestock increases the likelihood of antibiotic-resistant bacteria, and feeding animal byproducts can increase the risk of mad cow disease in livestock.

Instead, cows are required to graze in open spaces for at least a certain amount of time. Going along with this, all food consumed by these cows must be GMO-free.

In 2016, one study showed that organic milk had a greater amount of nutrients than conventional milk.

Because of all these standards, organic farming tends to be environmentally beneficial.

Clearly, there are standards that are to be upheld in order for your milk to be considered organic, but how often do organic dairy companies uphold those standards to the highest degree?

Peter Whoriskey is a journalist who spent time investigating the organic farming practices of Aurora Organic Dairy, a company that provides organic milk to large retailers.

What he found was pretty interesting. During his investigation, he found that while they followed the protocol for allowing cows to have access to grazing pastures, out of 15,000 cows, only a couple hundred cows were ever out grazing at a time; the rest were in feedlots. While this might not be the case on every organic farm, it does raise questions about large, organic dairy farm practices.

The way that the USDA qualifies farmers as organic farmers may also be a point of concern.

Instead of the USDA sending out their own certifiers, the dairy farmers will hire their own inspectors who then certify them and report back to the USDA.

These inspectors visit the farm once a year to examine the standards.

This method of certification could raise questions because the certifier is paid by the dairy farm to report to the USDA.

They are not paid by the USDA for an objective report. As an example, Whoriskey discovered that the certifier who investigates Aurora Organic Dairy found that the visit takes place outside of grazing season, meaning the certifier does not even see the farm during grazing season—the time of the year that plays a big role in whether or not a farm can obtain “organic” status.

Horizon Organic milk, another popular store-bought brand of organic milk, has been found to implement some sneaky advertising.

According to their cartons, they contain DHA Omega-3, an omega-3 that supports brain health.

You would expect that there is increased omega-3 in their product due to better farming and grazing practices.

After all, some studies do show some increase of omega-3 in milk from cows that graze regularly, but this is not the cause in Horizon’s milk.

Instead, they actually add an omega-3-containing oil produced by algae that is fed with corn-syrup.

Apart from the gross-factor, there is hardly any GMO-free corn in the United States causing you to wonder if the corn-syrup fed to the algae is GMO-free.

If it is not, this seems like a violation of the non-GMO aspect of organic standards.

As you can see, just because something is labeled “organic” does not necessarily mean it is of a higher quality or is a result of better practices than conventional dairy farms.

Why it’s important to buy local

While not all small, organic dairy farms may uphold perfect standards, many of them will have better farming practices than the big farms simply because they have fewer cows to feed.

This allows for more grazing throughout grazing season and quicker milking times.

Buying organic milk from local farmers also gives you the opportunity to visit their farms to see their farming practices for yourself and get to know their passion for organic farming.

How to determine the quality of your organic milk

If you want to really know the quality of your milk and how closely the farm it comes from follows organic standards, but you cannot personally visit the farm, you can look at the code on a house brand carton of milk.

Aurora Organic Dairy’s code is 08-29, and other house brand codes will be four or five numbers. With this information, you can research the farm and determine if they follow protocol to your satisfaction.

Another good resource is the Cornucopia Institute.

They are major advocates for family farming, and state that “…through research and investigations on agricultural and food issues, [the Cornucopia Institute] provides needed information to family farmers, consumers and other stakeholders in the good food movement and to the media.

Always research the brands of milk you are interested in purchasing if you choose to buy organic milk so that you may know that your milk is of the highest quality!

What kind of milk do you drink?

Please share with your friends this article on Organic Milk – Use any of the social media and email buttons on the left of our website.

If you are concerned about getting enough calcium for stronger bones, we recommend drinking the following highly nutritious supplement instead –