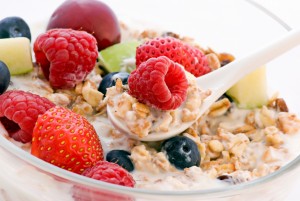 Breakfast cereal is one of the least healthy yet most common pre-packaged foods you can buy at the supermarket.

Cereal makes up more than a quarter of all breakfast foods consumed, and that needs to change. Not all cereal is bad for you, and some cereals are not nearly as bad as others.

Among those that aren’t unhealthy, some offer little to no nutritional value, and so they are a pointless filler food. However, most popular cereals are particularly unhealthy.

Take cereals like Lucky Charms and Fruit Loops, for instance. If you wouldn’t let your child eat a pack of candy for breakfast, know that letting them eat a sugary cereal is nearly just as bad.

Below are seven of the top cereals you should avoid. 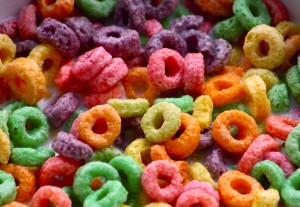 Froot Loops is a Kellogg’s brand cereal consisting of O-shaped pieces with a fruity flavor. Our first obvious negative factor here is the sugar content. When reading a nutrition label, all carbohydrates should be considered, since most break down into simple sugars in the body.One cup of Froot Loops contains 25 grams of carbohydrates.

Less than 1 gram of this is fiber, which would be the only beneficial component of carbohydrates. Another thing to consider is that the pieces are all made to be the same shape.

This means that the cereal has been put through the process of extrusion. It is true for all shaped cereals that this process ruins most of the vitamins and nutrients in the grains. It’s a very high level form of processing, which practically renders the food product a filler at the end. Froot Loops contain modified cornstarch, which often contains MSG. MSG consumption can cause nausea, chest pain, and other unpleasant medical symptoms.

Trix is a General Mills cereal that has some very enticing commercials. Their slogan is, “Trix are for kids!” This colorful cereal contains 26 grams of carbohydrates per serving, which are broken down into simple sugars in the body. It has very little fiber and protein to outweigh it, and artificial coloring is used.

Many young children want to eat this cereal because of its unique commercials that dictate that kids should be eating it, but Trix are definitely not a healthy component of a balanced breakfast. This cereal does contain a decent amount of vitamins, but they may not even be useable by the body. One of the major negative ingredients in Trix is artificial coloring; it contains Red 40, Blue 1, and Yellow 6, along with other colorings.

Corn Pops are a Kellogg’s brand cereal. One attractive feature of this cereal is that is contains quite a few vitamins, but it is arguable whether these vitamins are actually useable by the body. Many vitamin-fortified cereals contain artificial vitamins that the body cannot actually break down and use. This cereal lacks fiber, which is something that is good to eat in the morning. Corn Pops come in at about 41% sugar, and have more sugar than is recommended for a breakfast food.

If one serving has more sugar than is necessary, then eating more than the serving size would clearly provide far too much sugar. One study found that when kids pour their own Corn Pops, they eat more than 50% more than they should be! Corn Pops contain BHT, which is clearly stated on the ingredients list on the box. BHT is a preservative that is approved by the FDA for use in food, but consumers should aim to avoid it in any product that they eat or use.

This product is about 33% sugar; while that is not the worst number on this list, and that is far too much sugar for a person with high cholesterol, high blood pressure, or other medical concerns to be eating just for a breakfast food.

Consumers are fooled into thinking this cereal is fairly good for them, but the truth is that it is not. Honey Nut Cheerios also contain BHT. BHT can cause liver damage, abdominal pain, nausea, and more; it has even been linked to neurological issues and cancer.

Cocoa Puffs are also guilty of being far too high in sugar. For adults and kids that particularly like chocolate, this is a very popular cereal. Because each piece is shaped like a puffball, this cereal also undergoes the process of extrusion, which depletes the original grains of any nutritional value. There is some fiber in this cereal, but it comes in at about 44% sugar, making it not worth eating.

This cereal has fructose (sugar) and high fructose corn syrup (sugar) added to its existing sugary goodness- doesn’t that just sound satisfying and healthy? The sugary and chocolaty taste of this cereal makes it another where it is likely that people will serve themselves far more than the recommended amount. One of the main negative ingredients in Cocoa Puffs is the artificial flavoring; instead of real chocolate (cacao), it actually contains processed and artificial cacao.

Cap’n Crunch comes in quite a few varieties, such as peanut butter and fruity flavored. First, this cereal is put through the process of extrusion. Not only is the cereal lacking vitamins and minerals because of this process, there are also practically no vitamins in the final product. While most cereals on this list have 10-20% daily value of Vitamins A and C, Cap’n Crunch has 0%.

This cereal is higher in sodium than many on this list at about 200mg per serving. When a food provides nothing useful for the body and also contains sugar and salt, things that no one these days needs extra of, that food is probably not something that should be eaten on a regular basis. Cap’n Crunch has caramel coloring listed under its ingredients; making caramel coloring involves reactions with ammonia and a high level of heat and processing. 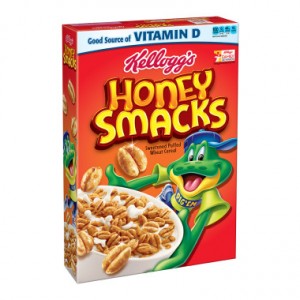 This Kellogg’s cereal has the highest percentage of sugar in this entire list, coming in at over 55% sugar. Honey Smacks have a small yet present amount of both trans fat and saturated fat, which are two unhealthy types of fat. Trans fat is something that many consumers try to avoid altogether. Honey Smacks cereal also undergoes heavy processing through extrusion, depleting it of any nutrients that it originally contained.

As a highly sugary cereal, it is likely that people, especially kids, will overeat when pouring themselves a portion of Honey Smacks. Honey Smacks come in a wheat form, which can actually be a negative characteristic. People may be misled into thinking that this cereal isn’t as bad as the rest because it’s made of wheat, but it is still nowhere near a healthy part of a meal. Honey Smacks also contain caramel coloring; among other health effects, some types of caramel coloring used in food have been linked to cancer in lab mice.

The common trend among these seven cereals that should be avoided is heavy processing and harmful ingredients. The key to making good choices about the products that you eat is understanding what exactly goes into them, and knowing what effects each ingredient has on your body.

For example, most people probably aren’t aware that caramel coloring in itself is made with ammonia and is bad for the body. Many of these cereals contain BHT, artificial coloring, and artificial flavoring. Simply being aware of what you’re putting into your body can vastly improve your health overall, as you’ll be able to avoid potentially harmful foods like these breakfast cereals.

Now if you are concerned about weight gain, you might want to consider doing THIS before eating carbs like cereal, rice, pasta and potatoes –

Do you look out for these ingredients in the nutrition label? Which wonderful friends in your life feeds these cereals to their family?