10 Scary Ingredients In Your Flu Shot 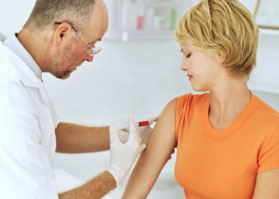 Vaccines have pros and cons, and it’s easy to argue either for or against them. The truth is that vaccines do contain quite a few harmful ingredients. Here, we will examine twelve of the worst ingredients in flu shots, a vaccine that just about anyone can choose to opt out of.

Many of these toxins are present in a variety of other common vaccines, but at least they are in small amounts. Small reactions to vaccinations are common, but severe reactions are rare.

Some people believe that flu shots are among the most dangerous, especially considering that they aren’t nearly as necessary as shots like polio and measles. The scary part is that all of the ingredients below are strong toxins to the human body, and some are even recognized carcinogens.

Did you know that the pharmaceutical companies that make vaccines are protected from lawsuits by the government? Like all drugs, these companies make a profit from selling vaccines, and so utilizing the cheapest ingredients is appealing to them. It’s easy to think that being protected from lawsuits could reduce their sense of accountability for the health effects caused by the vaccines.

If a severe reaction to a vaccine does occur, you have to make a case to the U.S. government itself. For a period of time in 2013, 70 people who experienced severe reactions to vaccines were granted compensation by the government. Eleven vaccines caused the reactions, yet 42 of the 70 cases – 60% – were caused by flu shots alone.

Now that you know that staggering percentage, here are ten scary ingredients found in flu shots.

1. Thimerosal is a vaccine preservative that is nearly 50% mercury. It is commonly used in multi-dose flu shots, but is present in other multi-dose shots as well. Single-dose shots and nasal sprays do not contain Thimerosal. Mercury is a strong neurotoxin and has been linked to brain tissue injury, among other internal problems.

2. Triton X-100 is a toxin when placed in the human body. It can be considered a detergent and is often used in pesticides. A study published in the Proceedings of the National Academy of Sciences journal demonstrated that Triton X-100 decreases viability of cells.

3. Polysorbate 80 has been linked to infertility and other hormonal issues in mammals. There have been more than a few reports of allergic reaction, even as far as anaphylactic shock, to Polysorbate 80. This is shown in an article published in the British Medical Journal, where an example patient reacted with severe side effects to multiple vaccines containing the chemical.

4. Formaldehyde is a chemical known for preserving dead body tissues. It is a known carcinogen to people, but it is present in flu shots. Mild reactions to Formaldehyde in flu shots are common, usually presenting as flu-like symptoms like coughing and runny nose. More severe reactions occur, too, such as respiratory disease, seizures, and acute abdominal pain.

5. Phenol is used to make plastic and as a disinfectant. Common reactions to phenol include respiratory tract irritation, skin rashes, and muscle weakening. Studies exposing lab animals to phenol have resulted in severe reactions including death.

6. Aluminum is widely known as harmful to the body, and many people avoid aluminum in things like deodorants because of its side effects. It can be a neurotoxin and is possibly linked to Alzheimer’s Disease.

7. Nonoxynol is commonly used in spermicides and disinfectants. A study published back in 1991 showed that the chemical caused damage to the skin cells in women who used spermicides containing Nonoxynol, concluding that is can be toxic.

8. Octoxynol 9 has been shown to cause skin rashes, dizziness, fever, and other issues. It was previously used as a spermicide, but has been discontinued. This ingredient may be present in some flu shots; the compound seems to be closely related to Triton X-100.

9. Neomycin is present in vaccines for Tdap, Hepatitis A, Hepatitis B, the flu, MMR, MMRV, polio, rabies, smallpox, varicella, and shingles. Antibiotics have various harmful effects on the body, which is why it’s important to get antibiotic-free meats and avoid taking antibiotics unless truly necessary. Neomycin in particular has been linked to kidney problems, and can act as a toxin to the ears and the brain.

10. Betapropiolactone is a toxin and carcinogen that is present in some vaccines for the flu, rabies, and Tdap. The U.S. Department of Health And Human Services has study data that shows that certain levels of exposure to this chemical in rats can lead to organ damage, respiratory distress, and muscle spasms.

Clearly, there’s a lot more going on in flu shots than most people are aware of. Many shots, including those for the flu, even contain MSG, the chemical that many people go out of their way to avoid in foods. Some vaccines are necessary, and the small risk of an adverse reaction is much more favorable than the idea of getting a disease like polio.

However, flu shots are rarely required, and many people decide to skip them. There’s good reason behind this; even though these chemicals are only present in small amounts, toxins are toxins, and they can still harm us.

Instead of taking flu shots, go to the next page and find out the ‘most powerful healing nutrient known to man’ for a stronger immune system.

Do you take flu shots? Share with us in the comments below whether if you think they are effective or not.