Why Tilapia Is Worse Than Bacon 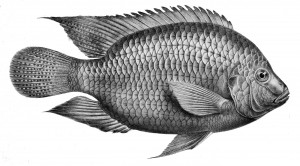 Fish is stereotypically the healthiest type of meat, and it is something that doctors often encourage people to eat because of its health benefits. Fish is generally lean, high in protein, low in saturated fat, high in omega-3 fatty acids, and high in vitamins and minerals. Common vitamins and minerals found in fish are vitamin B, vitamin D, vitamin A, iron, selenium, zinc, and iodine.

Not all kinds of fish are created equal, though.

Eating healthy fish regularly reduces your risk of heart disease and dementia, among other illnesses. Many types of fish that you know of are healthy, but tilapia is not among them. Some health professionals have said that, when compared to bacon, tilapia and certain other farm-raised fish varieties can be even worse for your health.

Bacon is high in bad fats and cholesterol, and can contribute to heart disease. It’s important to eat fish, but it’s even more important to make sure that you’re eating the right kinds. There are two basic categories of fish: wild-caught and farm-raised. There are pros and cons to each type, but wild-caught is definitely the healthier variety.

Commonly farm-raised fish types include tilapia, cod, seabass, catfish, and salmon. Some healthy wild-caught fish are salmon, tuna, and sardines. When comparing the average serving of tilapia to the average serving of bacon, the tilapia is often higher in saturated fat, calories, and cholesterol, not to mention toxins acquired through the fish farming process.

Wild-caught fish roam freely in the water, eating aquatic vegetation, insects, smaller fish, et cetera. Because of the variety of food sources available, the meat of wild-caught fish contains more vitamins and minerals than that of farm-raised fish. Wild-caught fish have tons of healthy omega-3 fats and quite low levels of unhealthy fats; omega-3 fatty acid content is one of the biggest health reasons that people strive to eat more fish.

Farm-raised fish tend to have more “contaminants” than wild-caught fish do. This may mean PCBs, antibiotics, and toxins in general. These fish are sometimes fed smaller fish that are caught in the same area, which increases the levels of toxins in the fish. Farm-raised fish tend to have higher levels of saturated fat, lower levels of healthy omega-3 fats, and less protein. These fish are contained in smaller, regulated areas of water, and so they are much more prone to disease.

Antibiotics are necessary to treat these diseases, and those same antibiotics are often present in the meat that people consume; this can be a major health risk for consumers.Their diets are very regulated and less comprehensive than a wild diet; the fish consume fewer vitamins and minerals, such as calcium and iron, because of their limited diets. This translates into less nutrient-dense meat for consumers. Farm-raised fish are generally less healthy to consume, however they are much cheaper to produce than wild-caught fish are. Having fish that are raised on a farm helps reduce the issue of overfishing.

Clearly, there are quite a few health concerns that arise when discussing farm-raised fish. If it were possible for everyone to have as much wild-caught fish as they desired and it not annihilate the wild populations, then fish farms would not be as common.

Overfishing is already a major concern, and so fish farms are unfortunately necessary. In some cases, farm-raised fish may simply have slightly less nutrients than wild-caught fish do. In other cases, the fish may contain high levels of certain toxins.

There are regulations on the levels of major toxins found in fish, but if you consume farm-raised fish very regularly, then some toxins can build up in your body and cause issues. Having considered the basic ways that farm-raised fish are less healthy than wild-caught fish, here is why farm-raised tilapia is particularly bad for you – sometimes even more unhealthy than bacon.

The Problems With Tilapia (And Farm-Raised Fish Overall)

Other farm-raised seafood, such as shrimp, can be just as bad. While there are regulations, they don’t necessarily protect consumers enough. Avoiding farm-raised seafood may not always be possible, but due to the increased levels of toxins in the meat, it should definitely be limited. If you were to consume farm-raised seafood often enough, the levels of certain toxins, as well as antibiotics and hormones, would build up in your body. As far as health goes, wild-caught fish are the better option, especially those that are naturally high in omega-3 fatty acids, such as salmon. On occasion, farm-raised seafood probably isn’t going to do too much harm.Just be sure to do your research and avoid particularly unhealthy kinds like tilapia.

To protect yourself from detrimental effects of the farm-raised fish, go to the next page and find out how you can boost your immune system –

Which wonderful friends in your life would appreciate this information about knowing more about the fish they eat?