What’s Really in Your Meat? 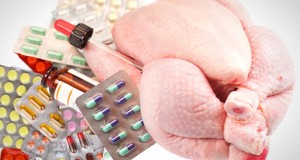 Never before has the world seen such a revolution in consumer demand for healthy, natural foods. Not only is meat production a leading cause of global warming and water usage, the processes by which meat is raised is causing great concern. The use of synthetic hormones and antibiotics in meat and dairy production has caused an uprising among consumers, along with feeding unnatural diets and questionable farming practices.

With concern over health effects of added hormones and antibiotics to the food supply, numerous countries around the world have implemented strict bans on hormone and antibiotic use; many countries ban the import of American meat due to the continued use of these products in the U.S.

The US Food and Drug Administration has been approving a large number of steroid hormones for use in food animals since the 1950s, while recombinant bovine growth hormone (rBGH) and recombinant bovine somatotropin (rBST) is given to dairy cows to increase milk production.

All mammals produce natural hormones, including estrogen, progesterone and testosterone. Hormones used in meat include these naturally occurring hormones and their synthetic versions. These hormone rBGH increases milk production in dairy cattle up to 15 percent and other synthetic hormones increase the growth rate in food animals and how efficiently the animal can turn the food it eats into meat.

Numerous countries around the world have banned the use of rBGH and rBST, including the entire European Union and Canada. The US has yet to ban such hormones as the FDA works with Monsanto to ensure the practice continues and argues that the product is safe.

According to the American Cancer Society, “The available evidence shows that the use of rBGH can cause adverse health effects in cows. The evidence for potential harm to humans is inconclusive.” However, the Physician’s Committee for Responsible Medicine states “Once introduced into the human body, these hormones may affect normal hormonal function.”

The use of sub-therapeutic antibiotics in meat has been an industry standard for decades since farmers discovered that small, seemingly insignificant doses of antibiotics made animals “gain as much as 3 percent more weight” than they naturally would, according to PBS’ investigatory program “Frontline.”

Although not fully disclosed or known, Stuart B. Levy, M.D., a studied expert on the use of antibiotics in the meat industry, estimates up to 17 million pounds of antibiotics are administered to food animals in the US every year.

Antibiotics have caused concern primarily due to the scare of antibiotic-resistant bacteria in humans. One of the antibiotics commonly used in meat/poultry production is Baytril, a sister drug to Cipro, an antibiotic given to humans to prevent or treat anthrax, salmonellosis and campylobacteriosis. Both Cipro and Baytril belong to fluoroquinolone, a highly effective and powerful class of antibiotics.

The New England Journal of Medicine published a study on February 6, 2002 linking people with Cipro-resistant bacteria acquired these harmful bacteria from eating pork meat contaminated with salmonella. Another study by the same journal in 2001 showed that 20 percent of supermarket ground meat was salmonella-contaminated and that 84 percent of the salmonella was resistant to some form of antibiotic.

The controversy then stems from this, with many arguing that sub-therapeutic use of antibiotics in feed animals is increasing drug resistance in humans. However, others argue that the increased use of prescription antibiotics for even minor illnesses plays an equal – if not greater – role in humans contracting drug-resistant bacteria.

Furthermore, higher levels of inorganic arsenic were found in chicken meat from chickens treated with the drug 3-Nitro (Roxarsone) when evaluated by the FDA.

A trip to the supermarket now lends a greater choice in types of meat available, including a “Grass-fed” label. Grass-fed, by simplest definition, means the cattle graze on pasture and aren’t fattened up at a feedlot prior to slaughter.

Large farm operations often rely on unnatural diets to fatten animals with less cost and in less time. The use of corn, soy and other grains is commonly used as opposed to pasture feeding. While many food animals will gladly eat grains and even eat them as part of a natural, well-rounded diet, a diet comprising completely of grains is unnatural. In some cases, these unnatural diets also include protein from mammal sources are unidentified by-products and waste.

Organic Vs Natural Vs Conventional

In general, organic meat is always better to purchase than those with a “natural” label or no label at all. Organic meat has stricter guidelines and requirements, ensuring no unnecessary antibiotics or synthetic hormones go into the production of the meat; these animals also have natural diets.

Certified organic chickens are not treated with this drug. Chicken meat should never be an unnatural, bright pink color and the fat should be white or a deep, yellowish color, never gray; avoid buying chicken that has these characteristics at all costs.

To make matters more complicated, the word “natural” is overseen by numerous agencies.

Now that you know what is in your meat, would you still eat conventional meat?

Unless you choose to be a vegan, sometimes it is inevitable that there is only non-organic meat available when you eat out.

To protect yourself from these hormones, antibiotics, and chemicals, it is important that you boost your immune system. Go to the next page and find out the ‘most powerful healing nutrient known to man’ for a stronger immune system.

What type of meat do you eat? Share with us in the comments below whether if you think your meat are safe or not.