The Truth About Cleaning With Bleach 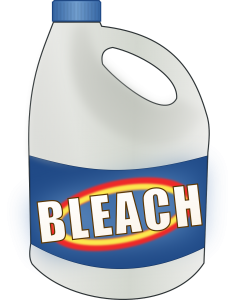 Many people over-use bleach because of the cultural idea that the whiter things are, the cleaner they are. Among other items, this may apply to clothes, sheets, bathtubs, kitchen sinks, and dishes.

It seems like a convenient chemical that can be used for quite a few purposes, and it is- the problem is that bleach has negative effects on both human/animal health and the environment as a whole. There are two main categories of bleach: chlorine based and non-chlorine based.

Chlorine bleach is the most commonly purchased type, and is usually the most harmful. Bleach usually acts as an oxidizing agent in order to whiten things, but not always. The main harmful ingredient in chlorine-based bleach is called sodium hypochlorite.

Bleach is sometimes the easiest solution to a problem, and many of the ill effects it causes occur over time. However, even occasional bleach use may be unwise. Did you know that government regulations by the Occupational Safety And Healthy Administration for bleach use in the workplace require that employees wear gloves and goggles/masks, and that the area be well ventilated?

It is a strong carcinogen according to the Environmental Protection Agency, and may cause asthma in those who are exposed to it as children. Certain countries have laws that limit the use of chlorine-based bleach because of just how harmful it is proven to be.

A study in the American Journal of Epidemiology found that exposure to dioxin, a toxic byproduct of sodium hypochlorite, significantly increases the risk of long-term issues like diabetes, respiratory disease, lung cancer, and lymphoma.

Recurrent or prolonged exposure to bleach can lead to far worse effects, including but not limited to scarring of the airway, nervous system damage, cancer, asthma, birth defects, and potentially death. The cancer-causing effects of bleach and chlorine have been proven in many scientific experiments and studies. It’s actually pretty scary to think about just how often you’re exposed to bleach.

White grains like bread are chemically bleached during production, most packaged water has chlorine in it, swimming pools are often treated with bleach and/or chlorine, many white clothing items are bleached; printer paper, baby diapers, toilet paper, feminine hygiene products, notebook paper, and tissues are all commonly bleached, too. Simply wearing bleached clothing is bad for us, and it can cause skin and respiratory problems over time.

Most of the items that are commercially bleached simply do not need to be, and as for the household, there are plenty of other products that are less harmful to people, animals, and the environment. There are also simple recipes online for creating homemade, eco-friendly, inexpensive, and safe cleaners.

Effects On The Environment

Homemade bleach recipes often involved a few of the above ingredients mixed together.

There are so many varieties out there, but hydrogen peroxide mixed with with lemon juice is especially common.

Making your own cleaners is always a great idea, but if you aren’t able to, then some of the non-chlorine based bleach varieties may be suitable. Some are made with hydrogen peroxide as the main active ingredient, and may not be much worse than a homemade kind. Just be sure that you don’t over-use it!

Related Article – 8 Toxic Household Products You Should Get Rid Of
http://diet-sage.com/health-news/8-toxic-household-products-you-should-get-rid-of

Which wonderful friends in your life would appreciate this information about knowing more about bleaching?