Is Your Olive Oil Fake?

Every day, people are being told how beneficial it is to use olive oil in the preparation of food, but did you know a gang of Mafia suspects were busted for sending fake, adulterated olive oil to the United States?

Yes, you read that right.

The Italian mafia, what the Italians refer to as “agromafia”, infiltrated Italy’s famed agriculture and food business and have made a substantial profit off these fake oils; an estimated $16.85 billion.

It is said that they have been doing this for almost four millennia, but with food supply chain being widespread, vast and lucrative, it’s easy for bad guys to tamper with our food.

One way could be mixing it with a cheaper vegetable oil.

Do you know of anyone who has become sick after consuming olive oil?

They most likely have a food allergy, but since they didn’t know their olive oil was mixed with soy, peanut, sunflower, hazelnut, corn, palm, sesame, grape seed and/or non-human grade oils, they figured they were safe.

Other common things found in the fake olive oils are mineral oil, PAHs, carcinogens that have been proven to damage DNA and the immune system.

Unfortunately for us, this is nothing new.

In 1981 there was a case of toxic oil syndrome in Spain, when an industrial additive was added to rapeseed oil and sold as olive oil, killing eight hundred people and injuring thousands more.

In 2010 samples of imported olive oils were tested by researchers at the UC Davis Olive Center.  69% of the samples tested failed to meet the international standards to be called extra virgin olive oil.

Just to give you all an idea of how rampant this thing really is; Tom Mueller, author of Extra Virginity, documents oil fraud going back to the Roman Empire.

According to a 30-year comprehensive academic food fraud study in the Journal of Food Science, the single most referenced adulterated food of any type in scholarly articles from 1980 to 2010, was olive oil.

When Davis Olive Center tested samples from supermarkets, they concluded that two-thirds (69 percent) of imported oils and 10 percent of California oils that were labeled “extra virgin” did not meet legal standard.

In 2011, a follow-up Olive Center supermarket test was conducted using a larger number of samples for consistency. The results showed the five, imported, top-selling brands labeled “extra virgin” in the United States failed to meet the basic legal standard.

There are some people who think the University favors the olive oil that is made by domestic companies, mainly in California, over any imports, so another company, the North American Olive Oil Association, who does their own testing, disputes the accuracy of UC Davis’ findings.

However, continued studies and investigations show in:

How to tell if your olive oil is authentic? 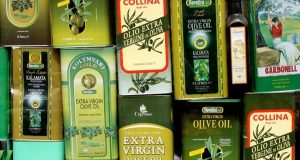 Now how many of you run to your cupboard to check your olive oil only to get there and realize you have no clue what to look for?

Unfortunately, you can’t tell by just looking at it and since people have learned you can find impure oil by testing it, they have come up with other ways to dilute pure oil with less than fresh versions by processing with heat or chemicals, which is harder to detect and illegal.

There’s still the question “So how can I find the real stuff?”  Well, there are some things you can look for:

Harvest date: It should say “fall harvest” or “early harvest” of the current year.

Storage and tasting: Oil should be stored in containers that are kept clean, made of stainless-steel with a temperature-control function and have an inactive gas, like nitrogen, that keeps oxygen out.

Flavor/Color: You want to look for extra virgin olive oil that has a bright green color to show high-quality; However, you can also find good quality oils that are green, gold or a pale straw.

The scent of a good oil can be described as fruity, like a green banana or apple, fresh or grass-like, spicy (which indicates the presence healthy antioxidants), bitter or efflorescent.

If the oils have the taste of mold, cardboard, being cooked, creamy, meaty, or hard-metal, they are no good.

Bottles: If you purchase pre-packaged oils, you want to look for one that is packaged in a stainless-steel container, glass that is dark or clear glass that is stored in a cardboard so they are protected from light.

Labeling terms: The label must say “extra virgin”. If it says, “olive pomace oil,” “olive oil,” “light,” or “pure” oil, it means it has been chemically processed.

It’s meaningless when they are labeled “cold pressed” or “first pressed”, because now EVOO (extra virgin olive oil) is made using centrifuges instead of being pressed.

Look for a seal of quality and certified origin: The Producer organizations are held to a much higher standard than the USDAs minimal standards.

Here are some examples:

There’s national chains, olive oil and vinegar stores, with different names, but look the same, with steel circular tanks that dispense oil and are adorned with lots of information about chemical analysis, olive variety, where it came from and when.

They provide tastings and sell in small quantities.

It’s best to buy from retailers that allow you to taste the product and sell small quantities.

Since open oil deteriorates quickly, it’s best to buy 2 small bottles/cans instead of one big one.

Try to buy oil that is less than a year old, follow the “pressed on” or “harvested on” date as this will let you know when it was made.

The “bottled on,” “sell by,” and “use by” dates are meaningless since they are up to the discretion of the manufacturer and most likely mean that is when they took it out of an old storage tank and put it in the bottle. It allows them to keep older stocks out on shelves.

Do you use olive oil? What brand of olive oil are you using?

Please share with your friends this article on olive oil – Use any of the social media and email buttons on the left of our website.