Genetically Modified Salmon – You May Have Eaten It Already!

October 13, 2017 by staff content in Health News with 3 Comments 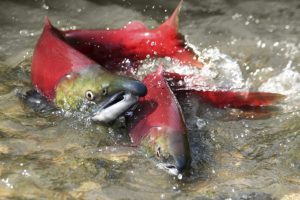 Genetically modified (GMO) salmon is the first animal product to be approved by the FDA for sale in the USA.

Not long after that decision was made earlier in 2016, the government of Canada approved it as well.

The FDA immediately restricted the import and sale of GMO until a labeling system can be implemented, but that didn’t stop the fish from swimming its way onto Canada’s dinner plates.

It also didn’t stop other countries from buying the GMO salmon eggs, to raise and then sell back to the USA.

The countries that have purchased the eggs to grow and sell are Brazil, Argentina, and Chile, making them an unknown variable in the search to identify GMO salmon.

Chances are good that you’ve already eaten some GMO salmon, and here’s why you should be MUCH more careful when choosing your fish these days.

Why make GMO salmon in the first place?

GMO salmon eat 20-25% less food than cage raised salmon according to AquaBounty, the company that is selling and raising these modified fish.

Secondly, they grow much more quickly than traditional salmon.

These GMO salmon are modified to constantly produce growth hormone, which makes them mature to adult size in 18 months, approximately ½ of the time it takes a non-GMO salmon.

This again means they’re cheaper to produce because farmers can use their tanks more frequently and can produce twice as much salmon in the same amount of time.

Thirdly, there is less waste. The salmon are not exposed to sea or lake water, and so they don’t pick up diseases or parasites that live in those ‘wild’ waters.

This is great for farmers because they don’t have to waste whole schools of fish to illness and parasite infection.

Why it’s dangerous for you

The biggest cause for concern is the constant levels of growth hormone (GH) produced by the GMO salmon. Studies have been done in the past on growth hormones in beef and the results were not good.

Ingesting high levels of animal growth hormone triggers the production of insulin-like growth factor (IGF) in the body. IGF plays a part in glucose regulation within your body, but it has some other scary functions as well.

High blood levels of IGF-1 have been shown to directly correlate with an increase in cancer growth, especially breast, cervical, and prostate cancers. Heavy research is being done in this area, as this is a highly repeatable finding.

Recent results are showing that while IGF-1 may not directly cause cancer (and they haven’t ruled that out yet), there are strong indications that it promotes and increases any cancer that may already be growing in your body.

The GMO salmon are producing growth factor throughout their entire lives, instead of the normal growth and breeding cycles that traditional salmon go through. This means that instead of getting the salmon when it’s GH levels are lowest, you’re getting it when it’s the highest, and thus getting the highest levels of IGF as well.

Another concerning factor is the results from AquaBounty’s FDA allergy testing. The first round of results was contaminated in some way, and when re-doing the tests, AquaBounty used a positively tiny sample size of 6 fertile fish and 6 sterile fish.

Even with these minuscule samples, however, there were some alarming results. The FDA will not allow AquaBounty to sell the fertile female GMO salmon because of the overwhelmingly high allergic reactions that happened during the test.

Again, the sample size was far too small to get any truly worthwhile data, but the fact that there was a large allergic reaction to some of the fish, could mean the same for the rest of the fish as well. AquaBounty’s unwillingness to repeat the studies with larger numbers is suspicious at best, and deadly at worst.

Lastly, the ratio of omega-6 to omega-3 fatty acids in the GMO salmon is the worst in any fish available for sale right now. For so many years it’s been hammered into you that you must eat fish to get those omega-3s that are so good for you. The GMO salmon is very high in omega-6 fatty acids, which are the opposite of good for you.

Omega-6s increase inflammation and oxidation in the body, causing (among other things) joint pain and weight gain, and contributing heavily to metabolic syndromes like diabetes, high blood pressure, and heart attacks. Inflammation is a huge factor in many chronic conditions as well.

Eating a food that you think is going to be high in omega-3s but is actually the opposite can be very harmful to anyone, but especially those with any of those conditions.

How to avoid GMO salmon

There is virtually no physical way to tell if what you’re looking at is GMO salmon. There is no difference in taste, texture, appearance, or smell between it and traditional salmon.

This is worrying because many people want to avoid GMO products for health, religious, or ethical reasons and that choice is being taken away from them. The easiest way to avoid it is to seek out salmon labeled with the location it was farmed in, and how it was farmed.

Look for wild or Pacific salmon, if you want fish that was caught in the wild and not grown in a salmon farm. Atlantic salmon is farm raised, in cages in the Atlantic Ocean. Neither is GMO salmon, however, and both are a great choice for fish.

Genetically-modified salmon has zero nutritional benefits. The only potential benefit to you is to bring down the market price of the fish, but that has not happened so far and it most likely won’t anytime soon.

There are, however, many potential downsides to eating GMO salmon. It has the potential to increase the growth and prevalence of cancer in your body, it can cause massive allergic reactions, and can also increase inflammation in your body leading to heart attacks and whole-body pain.

There are many reasons to skip the GMO salmon; it’s not worth the risk to your health.

To protect yourself from cancer-causing hormones you might ingest from these GM animals, go to the next page and discover how to boost your immune system –

How often do you eat salmon? Are you concerned about genetically modified animals?

Please share with your friends this article on GM Salmon – Use any of the social media and email buttons on the left of our website.