January 27, 2019 by staff content in Health News with 2 Comments 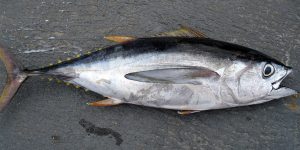 Tuna is one of those fish that seems to be a staple in almost every household.

It is easy to find, inexpensive and encouraged as a healthy and necessary food.

In fact, the FDA encourages the consumption of light, canned tuna 2 to 3 times per week.

Unfortunately, tuna can contain a large number of toxins that you may not know about.

A study in 2015 was released that compared the meat of 117 different yellowfin tuna that were caught at 12 locations around the world.

The researchers measured the amount of persistent organic pollutants (POPs) as well as the amount of mercury (the results of which were published in a separate study).

In short, what they found was that the higher levels of these toxins correlated very strongly with where the fish was caught.

What is a POP?

Persistent organic pollutants are various hazardous environmental chemicals that accumulate in animals and are commonly detected in humans.

They accumulate in fat cells which makes them slow to leave the body.

Many POPs have been banned from use or drastically reduced over the years, but there are a lot that still remain including pesticides, solvents, industrial chemicals and pharmaceuticals.

These POPs have established negative health effects in humans.

To make matters worse, the study also discovered a group of pollutants known as Transporter Inhibiting Compounds (TICs) in the fish.

TICs are a type of pollutant that inhibits the body’s ability to protect itself from and remove chemicals and toxins.

So not only would you be exposed to pollutants, some of those pollutants could make it even more challenging for your body to expel other toxins.

Mercury is also a known toxicant that can be hazardous to the body.

In the same 117 tuna from the first study, researchers were able to determine that the amount of mercury in the fish was connected to where it was caught.

Since tuna is a larger fish, the problem you run into with mercury is a process called biomagnification.

When a small fish bioaccumulates a toxin, that toxin, like mercury, then becomes more concentrated and hazardous in the larger fish that eat the affected smaller fish.

Is tuna not safe?

The purpose of the studies was to provide a better way to determine the levels of toxicants in yellowfin tuna.

Most of the samples found levels that are considered “safe” by the FDA’s standards, but those harvested from some locations did trigger the need for safety warnings for specific populations like pregnant and nursing women.

The ability to trace where your tuna was caught will play a large role in determining if it is some of the “safer” tuna to eat.

It is no surprise that industrialized areas, the Northeast Atlantic Ocean and the Gulf of Mexico were found to have some of the highest and most potent levels of toxins.

When it comes to industrialized areas, the toxins that are in the air then settle into the water and are consumed by the small fish in the area.

Then, as mentioned above, larger fish eat those small fish and the process of biomagnification occurs.

How can you trace your tuna?

This is where it gets tricky. Unfortunately, fraud in the seafood world has become quite common.

A report released in 2016 by Oceana discovered that up to 1 in 5 samples were mislabeled.

In fact, fraud has been found at every part of the seafood supply chain including retail, wholesale, distribution, import and export, packaging and processing, and landing.

This dishonesty can make tracking your tuna particularly difficult.

Due to the level of fraud that occurs regularly in this industry, a task force has been created with the purpose of reducing illegal, unreported and unregulated (IUU) fishing.

Apart from the government’s efforts in preventing fraud, some companies have determined to be more transparent about where their fish are caught. Here are some examples:

With yellowfin tuna being the second highest consumed tuna in the United States, it is important to carefully and accurately determine where it is being caught.

This may seem like a daunting task initially, but with awareness of seafood fraud and pollutant levels of tuna becoming greater, there are companies who are interested in providing accurate and honest information for their consumers.

Be intentional about finding where your tuna comes from so that you can choose the best option.

When it comes to your health, toxins and pollutants can have significant effects, and sadly, they tend to come from many environmental sources. Reducing the amount of toxins consumed will help you to live well!

To protect yourself from these toxic chemicals (which lead to higher risk of cancer) in many of our everyday’s food, go to the next page and discover how to boost your immune system –

When is the last time you or your loved ones ate tuna? Do you know where they are caught?

Please share with your friends this article on Tuna – Use any of the social media and email buttons on the left of our website.