Do Pringles Cause Cancer? 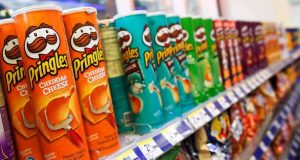 “Once you pop, the fun don’t stop!” is a widely known catch phrase that Pringles popularized in an effort to make it’s “potato” chips easily distinguishable from others, along with their unique shape, large variety of flavors and recognizable tube packaging.

With its melt-in-your-mouth texture and addictive taste, Pringles are one of those snacks that are difficult to put down once you start eating them making them a treat that should be given a second thought before being consumed.

What is it about Pringles that makes one crave them?

Having been carefully designed to keep the consumer returning for more, Pringles ingredients are satisfying, but also harmful.

According to the Pringles’ website, the ingredients in Pringles Original are dried potatoes, vegetable oil (one or more of corn oil, cottonseed oil, soybean oil and/or sunflower oil), rice flour, wheat starch, maltodextrin, mono- and diglycerides, salt, and dextrose.

Other flavors will have additional ingredients depending on the specific flavor profile.

While it is the first ingredient listed, potatoes only comprise about 42% of the content in these “potato” chips.

In fact, Proctor & Gamble, the company who owns Pringles, argued in court that Pringles chips were not actually a potato crisp product.

In an attempt to avoid a specific tax on placed on potato crisp products, Proctor & Gamble said that Pringles were different from other potato chips because of their texture, color, shape and the fact that they are manufactured from dough, not strictly potatoes.

The vegetable oil is another issue with Pringles. Like most fried chips, it is this oil that contributes to the over-consumption of omega-6 fatty acids in the Western diet which leads to an imbalance of essential fats in the body.

The large amount of salt in a serving of Pringles can easily put one’s salt intake over the daily recommended amount.

One ounce (about 16 chips) is considered one serving and contains 330 mg of salt; there are approximately 6 servings in a regular-size can of Pringles, placing the total amount of sodium in a can around 1,980mg.

The daily recommended intake of salt for the average person is approximately 2,300 mg.

Because it is so difficult to only eat a few of these chips, it becomes very easy to consume far more sodium than is necessary or healthy when these are the snack of choice.

Over-consumption of salt leads to inflammation in the body. Inflammation is the major issue in chronic diseases and can exacerbate acute illnesses as well.

The ingredients on the package are certainly ones that should be avoided, but perhaps one of the most dangerous issues with Pringles (and honestly, any potato chip or French fry) is a byproduct of the manufacturing process called acrylamide.

Acrylamide is a compound that is formed when starchy foods, like potatoes, are cooked (fried, roasted, and yes, even baked) at high temperatures (above 212°F).

This compound is a known carcinogen and potential neurotoxin that is found in more than just chips. It is also formed when grains and coffee are toasted or roasted, thus the total amount of acrylamide consumed on any given day may be much greater than expected.

The allowable amount of acrylamide in one 8 oz glass of water according to federal guidelines is 0.5 part per billion (ppb) or .12 micrograms.

To give you an idea of how much acrylamide may be formed in a starchy product, in one 6 oz serving of French fries, there is about 60 micrograms of this carcinogenic substance.

Another example comes from a lawsuit that began in 2005 when the state of California sued a popular chip company for failing to warn consumers that their chip products contained enough acrylamide to warrant a cancer warning label.

Unfortunately, the process for measuring the amount of acrylamide is expensive and time-consuming making it difficult for chip manufacturers to be motivated to check their chips for acrylamide production on a regular basis.

Research is being done to find a more efficient and cost-effective method of measuring these amounts.

Acrylamide is only one danger from cooking foods at high temperatures. A project called Heat-Generated Food Toxicants (HEATOX) published findings in 2007 that revealed over 800 heat-induced compounds in foods with 52 that were possible carcinogens.

These toxins can build up in the body over time and result in negative acute and/or chronic health issues.

So what makes them so addictive?

The specific combination of ingredients plays a major role in Pringles’ addictive properties. When they are consumed, they affect the blood sugar and give a quick boost of energy because they are made from refined carbohydrates.

This does not allow for a lasting feeling of satiety, thereby creating a desire for more food. The specific flavor dustings on the outside of the chips also contribute to the tastiness that makes consumers keep coming back for more.

Also, that melt-in-your-mouth sensation was not accidental.

A lot of time and money went into developing a texture that would trick the body into believing it was not eating much and needed to have more.

If you think about it, you will realize that once the initial crunch occurs when you first put a Pringle in your mouth, the chip quickly dissolves.

Because the chip is not chewed like other foods, you are more likely to consume a larger number of chips before your stomach can signal to your brain that it is full.

The best way to avoid acrylamide and other dangerous ingredients or byproducts in Pringles is to stop eating them altogether.

They were created with the intention of causing the consumer to become “addicted” to them.

If you don’t ever pick them up off the shelf, you won’t find yourself in a mentality of “needing just one more”.

Finding the perfect healthy chip is something that many health-conscious persons are still trying to do.

This will likely always be an ongoing process since there is not really a healthy method for making chips of any kind, but for now, it is safe to say that avoiding Pringles is absolutely in the best interest of your health.

Besides Pringles, there are many more foods containing carcinogens that increase your cancer risk dramatically. Go to the next page and & learn how you can protect your body from cancer –

Do you eat Pringles?

Please share with your friends this article on Pringles – Use any of the social media and email buttons on the left of our website.