Can Talcum Powder Cause Cancer? 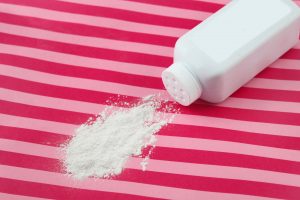 Talcum powder was first marketed for cosmetic use in the early 1900’s.

It quickly became a popular product for women and children to be used in private areas to help reduce the amount of moisture on the skin.

In the 1970’s, researches started doing studies on the risks of talcum powder being used in the genital area and found that many of the ovarian tumors tested had talc particles embedded in them.

Because of these findings there have been multiple lawsuits against Johnson and Johnson.

February 2016, Jacqueline Fox, 62, was awarded $72 million, $10 million was for compensatory damages and $62 million for punitive damages.

Jacqueline Fox died in Fall of 2015, three years after she was diagnosed with ovarian cancer.  Her deposition was provided in a statement she had prerecorded;

It stated she had used Johnson & Johnson powders, Shower to Shower body powder and talcum powder, for 35 years and she believed they were responsible for killing her.

Since Jacqueline Fox passed away before the case was over, her family was awarded the $62 million.

After forty years of using talcum powder products made by Johnson & Johnson, a 62-year-old woman named Lois Slemp, of Wise, Virginia, was diagnosed with ovarian cancer (2012).

She sued Johnson & Johnson claiming that her use of the talcum powder is what caused her ovarian cancer.   She won her case and was awarded £85 million which is equal to $112,395,500 in the US.

In 2016 another woman by the name of Deborah Giannecchini from Modesto, California, was awarded more than £58 million, which is equal to $76,699,200, in the US, when she claimed the baby powder from Johnson & Johnson gave her ovarian cancer.

Johnson & Johnson denies the claims against their product and plans to appeal and dispute the scientific evidence that was used in Lois Slemp’s claim.

What is talcum powder made of?

The easy answer is Talc, but what exactly is Talc?  It’s a clay mineral, mined from deposits/stone, made of oxygen, hydrogen, magnesium, and silicon.  Prior to 1973 it also contained asbestos.

It is used for moisture absorption, when you change babies’ diapers, on adults with intimate odor, and in make-up.

At first, it is the asbestos.  But after removing asbestos, does talc cause cancer?

When talc is first mined it contains asbestos, known to cause lung cancer, so in the 1970’s the formula was changed to exclude most, some traces may remain, of the asbestos in Talc products in the US because of the cancer risk from inhalation.

Johnson & Johnson refuses to acknowledge any link between ovarian cancer and talcum powder at all.

They claim, since excluding asbestos, there products are safe for use; but there are upwards of 20 studies that show the dangers of talc.

One study found that women who use talc, only once a week, on their genital area have up to a 36 percent greater chance of developing ovarian cancer.

While women who use talc, every day boost that risk by up to 46 percent.  The research in this study states that talc particles in the ovaries causes a process of inflammation that encourages the growth of cancer cells.

A study done in 1993 by the U.S. National Toxicology Program, found evidence that the talc without asbestos in it had carcinogenic activity.

The American Cancer Society claims talc is not a known carcinogen.  However, they do acknowledge talc, in baby powder and body powder, “has been suggested” to cause ovarian cancer when in direct contact of the genital area.

– A study in 1997 found a 50 to 90 percent increased ovarian cancer risk for women who used talcum powder or feminine deodorant sprays in the genital area.

– In 2000, a study found a 40 percent increased risk for one type of ovarian cancer called invasive serous, in those who used talc.

Although there have been many documented articles about the dangers of talc; the real kicker came from the journal Anticancer Research published in 2003.

They offered what is called a ‘meta-analysis,’ a large-scale review, of studies that were published previously.  It showed sixteen studies, that involved 11,933 women who used talc, had a 33 percent risk increase of ovarian cancer.

The Canadian government classified talc as a D2A substance.

The international Agency for Research on Cancer, part of the World Health Organization, says talc is only “possibly carcinogenic to humans,” when used in the perineal area.

Most major health groups have decided that talc is harmless because of other studies that show little to no link between the product and cancer.

With all the evidence from studies shown; the FDA only says they are aware of medical reports showing the increase in development of ovarian cancers in women who frequently used talc in the genital area, but they don’t plan to ban the products or even require the company to add a warning label.

Even with the majority of studies showing a connection between talcum powder and ovarian cancer; The Johnson & Johnson company still claims there is no reliable and consistent data showing any risk of using their product on or near the genital areas.

What can be used instead of talc?

A few natural products you could use are oat flour, cornstarch, baking soda, or baking powder (found in the baking isle).

Besides talc, there are more than thousands of toxic chemicals in many of the food and products you eat or use every day and they can increase your risk of diseases and even the big C.

Do you use talcum powder?

Please share with your friends this article on talcum powder – Use any of the social media and email buttons on the left of our website.