Antibiotics in Fast Foods – What’s inside that burger? 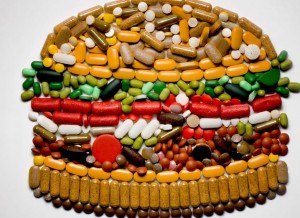 When you read words like “the dangers of fast foods” you probably think about trans-fats, calories and high sugar and salt content.

While those are all very real health issues (many of which we have covered before) there is one health issue that sneaks in with your big name burger that you might not have thought of – antibiotics in the meat.

Most of us are aware that over use of antibiotics poses health issues that range from super-strains of bacteria to resistance to treatment in serious cases. These drug-resistant bacteria are causing around 23 000 deaths per year.

The main causes of death being drug resistant strains of Tuberculosis, Pneumonia and Gonorrhea. So, it is a good idea to avoid over-use of antibiotics.

However, refusing antibiotics from your doctor (unless you’re really sick) is not an assurance that aren’t taking them. The meat that you eat in fast food chains is loaded with antibiotics and all of those immune-system destroying chemicals are being loaded into your (and your families) bodies, every time you eat them. Antibiotic resistance is a worldwide problem which is being aggravated by the fast food industry.

According to a report released by the Center for Food Safety, 16 out of 25 major food chains still score a “Fail” on the antibiotic test. Let’s take a look at the findings of this second annual test.

Safe from antibiotics – A Score

The following fast food Chains received an “A” on the report. They are the only fast food chains who you can eat from without fear of consuming unwanted antibiotics.

Panera– received an A – 100% of poultry and pork are antibiotics free and 33% of their turkey. However they are still busy reviewing their beef policy. They have two major beef suppliers. One of these doesn’t use antibiotics at all, the other does but only if the animals are sick.

Chipotle – received an A – 90% free of antibiotics.

These two companies both offer an array of meats which are antibiotic free.

Almost there – B Score

This food chain is holding the category alone. Their policy limits the use of antibiotics in meat animals. They have made a pledge to be 100% antibiotic free by the year 2019.

The following companies are adopting policies which are publicly available. They are phasing out routine antibiotic use in some of their meat, they have good policy content and they received points for transparency.

McDonalds – received a C – one out of nine of their companies are phasing out routine antibiotic use in both beef and poultry. They have adopted good policy content, but unfortunately these currently apply only to chicken. They also still allow routine antibiotic use for disease prevention on a regular basis. In their favour they responded fully to the survey and were willing to work with 3rd party auditors and their audit standards are publicly available.

Taco Bell – received a C – They announced in April that their chicken would be antibiotic free by early 2017. They received top transparency points for working with independent auditors. They are working on phasing out routine antibiotic use.

The following companies are in a similar category to the “C” category above, but with slightly lower rankings and ratings in all departments. They have adopted policies that are publicly available. These policies promise to phase out routine antibiotic use over time, in some or all of their poultry and meat. They did receive high scores for adopting a good policy. The D Category Winners are:

Pizza Hut – They were amicable towards the survey and received transparency points. The drawback is that these companies antibiotic policies apply primarily to chicken (Currently) and have not yet started to implement the policies across other meat types.

Papa Johns Pizza – They supplied no supply chain auditing information for evaluation to the survey. So there is no way of knowing if they comply with their policies. Their antibiotic policy for chicken applies to pizza toppings but not to the popular “wings” which they serve.

These are the companies who have failed outright on their policies, their practices and their supply chain information. If you eat from these companies you are consuming extra antibiotics.

Dairy Queen – F – They refuse to disclose a policy on antibiotic use in their meat and chicken. They provide no information about their meat sourcing. Customers have no idea what they are eating.

The following brands all FAIL. They disclose nothing to their customers or to the surveyors regarding a policy on antibiotic use. There is simply no telling what you are eating:

Avoid Antibiotics in your Meat

Needless to say the best way to avoid antibiotic laden meat is to simply stop eating it all together. But that is a bit extreme for most people. So instead you should at least avoid fast food. The reason why fast food joints use this meat is because it’s cheaper. Drugging the animals against bacteria allows the farm factories to produce more meat in less space.

If you buy meat at the store try to find out where the meat is raised and what practices are used. Find out what the treatment plan is for sick animals. If you are buying organic from a smaller store or vendor they should be able to give you this information easily enough – or put you in touch with someone who can.

You must also be wary of the labels used on meat. The USDA does not require meat farmers to have their processes audited in order to use labels like “no antibiotics added”. This is why questioning is always a good idea.

Remember – your body is made up of what you put into it. If you want to avoid being part of the problem, you must be part of the answer.

To protect your body from the drug-resistant bacteria, it is important to boost your body’s natural immune system.

Emma Deangela is the best selling author of The Alkaline Diet Program and 80/20 Fat Loss. She has helped over tens of thousands of men and women to lose weight and transform their health with sound nutrition advice. Trying to lose weight after the holiday binge? Learn how you can lose weight fast – How to lose weight by adding these alkaline foods.

Which wonderful friends in your life would appreciate learning about these antibiotics in fast food?