8 Toxic Household Products You Should Get Rid Of 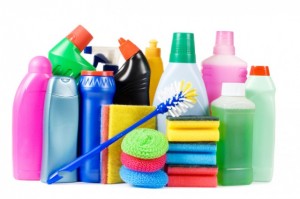 There are hundreds of household products that are bad for the environment, harmful to human health, or both. The companies that manufacture products generally do not care about their impact on health and the environment. Unfortunately, most companies focus on their profits rather than how well good product is with respect to those aspects of life.

It is up to each and every consumer to understand what products are made of, which substances are harmful, and how to make better choices about what they buy. Some extremely common items like air fresheners can actually have known cancer-causing chemicals in them, yet they are still seen as safe because the general population is unaware of the hidden harmful ingredients. Here we will go over eight common household products and why they may be bad for human and pet health, as well as for the environment.

Vinyl can be everywhere in a home, from pipes, vinyl and sidings to toys, furniture, and accessories. Vinyl products often contain phthalates, a chemical that is considered a plasticizer; it makes the vinyl softer and more flexible. Phthalates have been linked to hormonal issues, especially in males.

They can interfere with testosterone production and even cause birth defects in babies. The chemical also exacerbates asthma and allergy symptoms. Some vinyl products may contain lead, which is widely known as an extremely dangerous element. If vinyl is accidentally burned or a fire breaks out, awful chemicals are released into the air that can cause permanent damage to anyone who inhales them. If a person or pet is trapped in the house, the fumes from the burning vinyl can easily kill them.

Air fresheners have a lot of potential to harm humans and pets because they are dispersed into the air and then inhaled. We know that inhaling cigarette smoke can cause dozens of problems in the lungs and the respiratory pathway, and it is the same for air fresheners. Most kinds contain carcinogens and other harmful substances; a few well-known toxic substances that are common in air fresheners are formaldehyde, butane, propane, and acetone. All of these chemicals have been linked to cancer and/or lung complications when inhaled. One study found that 86% of air fresheners contain phthalates, the harmful substance that is often combined with vinyl to make it more flexible and durable. This chemical helps the scents in air fresheners last longer.

Household cleaners have a range of harshness. You can make your own, which is the best option for the environment and for your health. Unfortunately, many store bought cleaners turn out to be really harsh. It’s obvious that many of the chemicals are bad for the environment, but not as many people realize how harmful harsh cleaners can be to human and pet health.

Effects of harsh cleaners range from skin irritation, rashes, coughing, and dizziness, to permanent lung damage, trouble breathing, severe burns, and cancers. Some cleaners, such as laundry detergents and pet odor removers, have fragrances added to them. These cleaners have the added potential harmful effects of fragrances, as explained in the above paragraph.

In order to keep the food inside the can fresher, there is a lining on the inside of the can. This lining is called BPA, and it is basically a poison. BPA is present in things like canned beans, soda cans, and canned vegetables, but it is also used in other items like water bottles and baby bottles. The chemical interferes with the natural order of the hormones in your body; for example, it can prevent the secretion or elimination of necessary hormones.

In addition to BPA and other chemicals in the cans themselves, canned foods contain more preservatives than fresh foods do. This is a given, but all of that extra sodium and the unnecessary chemicals can be harmful, especially over time. Here’s a tip: buying dry beans by the pound is often cheaper than canned beans anyways, and it is much healthier.

Nonstick cookware is generally coated with Teflon, a synthetic molecule that helps prevent food from sticking to a surface. Teflon has one major health issue that manufacturers sometimes warn consumers about and the Environmental Protection Agency is aware of. This substance that is intentionally added to pans that will be used to cook with on a stove releases toxic fumes when exposed to high heat. It doesn’t make any sense that cookware would be coated with Teflon, but it is.

When heated up, the molecules start to disintegrate and release gases that, when inhaled, cause illness. In humans, it often presents as flu-like effects. It can have a stronger impact on smaller people and children. For small pets like birds, the effects of the Teflon’s gases can be deadly.

Remember the chemical BPA from the canned foods paragraph? It used to be very common in both disposable and reusable bottles. Most companies have stopped using it due to proven harmful effects, but some bottled water still contains it. There are also other chemicals in the plastic that can release toxins into the water and air, especially over time or if the bottle is exposed to heat. Disposable water bottles are simply terrible for the environment.

The process of creating plastic bottles causes significant air pollution, and only a small amount of bottles are actually recycled. Producing water bottles requires fossil fuels, which are nonrenewable resources taken from the Earth that will run out someday. Why waste precious resources on bottles that will be used for a few hours, and then dumped into a landfill? It takes thousands of years for plastic to break down; it just isn’t worth it.

Antibacterial soap contains a chemical called triclosan, which is the component that actually targets the bacteria. It’s been shown that antibacterial soap is actually no more effective than regular soap is, and if it is, it’s by a tiny amount. Therefore, the effects of the triclosan in the soap are totally unnecessary. The chemical has been shown to interfere with hormones, especially in the thyroid. Antibacterial soap has been associated with increased allergies and decreased immune strength in children. It’s even possible that frequent use of antibacterial soap could lead to antibiotic-resistant bacteria. The triclosan is bad for the environment because it is a waste product that builds up in the water and affects aquatic organisms.

Ammonia is present in so many areas of life, even in food. Certain food products like meats are processed with ammonia, a harsh chemical that shouldn’t be coming anywhere near our food. As for the household, the most common place that you’d find ammonia is in cleaning supplies. It’s considered a multipurpose cleaner, and it can function as a sanitizer, a degreaser, and more. Ammonia cleaners are bad for the environment because of harmful fumes that are released into the air, and because of ammonia waste that is released into the water. Harsh chemicals are not meant to be disposed of down the drain like water is, but the general population does so anyways. Like triclosan, lots of ammonia in the water can harm aquatic animals and even humans, too.

To protect yourself from the daily toxins you are exposed to, go to the next page and discover how you can boost your immune system with ‘The Elixir Of Life That You Are Missing Out!‘.

Which wonderful friends in your life would appreciate this information about the household products they used?