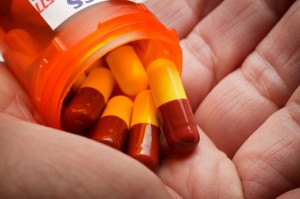 Taking antibiotics is like blowing up an atomic bomb in your gut to wipe out everything and anything. It doesn’t differentiate between harmful and beneficial bacteria. It destroys all living organisms in its path unapologetically leaving you with some devastating side effects.

You should know that killing off prized probiotics causes an unpleasant shift in your intestinal flora. This can lead to opportunistic yeasts to spread like wildfire inside your body.

When the gut is lacking in beneficial bacteria food becomes harder to properly digest, bowel movements become irregular, your body finds it difficult to absorb nutrients and you’ll probably be feeling bloated all the time.

Antibiotics may kill off pathogenic organisms to make you feel better but at the same time it weakens your immune system which leads to more illness, a vicious cycle indeed. Instead of wreaking havoc on your body with damaging prescription drugs, try these wonderfully natural & gentle antibiotic alternatives instead!

Do you enjoy the aroma of garlic?  Well, did you know that this flavorful little bulbous plant has been cultivated by humans for over 7000 years and has been used for culinary and medicinal purposes since ancient times? It is a fascinating herb that has proven itself amongst humans for thousands of generations. However, you must consume garlic in its raw state to experience the full benefits.

High heat can destroy the fragile substances that make garlic one of the best natural antibiotics you could ever obtain. Although there is method you could employ to help preserve the active substances. Chop, slice, crush or mince the garlic and let sit for 20 minutes.

Scientific studies have shown that garlic contains Allium sativum which is effective against preventing and curing the common cold. Amazingly in both World Wars, soldiers used garlic as an antiseptic against gangrene. It has also been shown to be an effective remedy against fungal infections. It is most effective against chest infections & digestive disorders.

Another proven fact about garlic is that it can help cure your bad breath! Add some garlic to your mouthwash to fight off bad breath causing bacteria. Some evidence has even suggested that garlic can kill E. coli and antibiotic resistant superbugs. So what are you waiting for? Make sure you add garlic to your diet.

Do you love the taste of honey? Well you’ll be pleased to know that a special type of honey called Manuka honey is actually a potent and natural antibiotic.

Manuka Honey is created when bees feed from the nectar of the Manuka tree found in New Zealand. This honey is special because it contains methylglyoxal which is a major player in its antimicrobial component. Research has suggested that methylglyoxal has a strong relationship with the non-peroxide antibacterial activity (NPA) in manuka honey.

The higher the methylglyoxal, the stronger the NPA.  Manuka honey is usually sold with information about the strength of antibacterial property through their trademark UMF (Unique Manuka Factor). Make sure you purchase honey with a high UMF from a trusted and certified seller. Are you still unsure about this sweet & sticky super food?

There is actually some strong and compelling scientific evidence that supports manuka honey in its role as a natural antibiotic. Studies have indicated that manuka honey is effective at treating mild burns when applied directly.

Another study has suggests that manuka honey may be used to prevent gingivitis and reduce buildup of plaque. Participants of that particular study were given a specially made chewable manuka honey gum that could be ingested as well as chewed like gum.

There have even been a few implications that manuka honey may help clear up nasal congestions caused by allergies. However there is much more solid evidence about manuka honey suppressing coughs and calming inflamed membranes.

Hundreds of children were given manuka honey or a synthetic cough suppressant, manuka honey was found to be more effective at soothing the childrens cough and allowing them to sleep peacefully.

Have you ever been interested in using Ayurvedic medicine? Turmeric is an orangey-yellow superstar in Ayurveda. Turmeric is an herbaceous plant that is related to ginger and requires heavy rainfall to thrive. You can have turmeric fresh, dried and ground.

You can consume it or apply it as a paste directly onto your skin. Turmeric has been used traditionally to heal a myriad of diseases, from chicken pox to liver disorders. It is the active compound curcumin found in turmeric that allows people to find relief from this awesome orange herb.

It is also curcumin that gives turmeric its antibiotic effects. Studies have suggested that turmeric can kill bacteria and viruses.  A study conducted in 2009 showed promising evidence of turmeric extracts being effective against E. coli, which is known to cause food poisoning.

Another study in the same year showed that turmeric extracts was able to suppress hepatitis B. In 2008 it was found that turmeric could be highly effective against fungal infections especially Candida albicans. Turmeric also helps you to fight off infection by strengthening specific proteins found on your immune cells.

Echinacea is a beautiful flowering herb that has been used for over 400 years by Native Americans. It was especially popular in the 18th and 19th century where many people used it to treat fever, syphilis and malaria. Nowadays Echinacea is successfully used to reinforce the immune system to help reduce symptoms of the common cold.

Herbalist may also prescribe Echinacea as an effective remedy against many fungal infections such as thrush and athletes foot. There has been an interesting study that suggested Echinacea may have exhibited antiviral activity against cold sores cause by the herpes virus. There are also 2 fascinating case studies proving the effectiveness of Echinacea.

The first one involves a woman who developed a horrid staph infection that was worsened by prescribed antibiotics. She decided to add Echinacea drops to her regimen and her symptoms improved miraculously. She got off antibiotics soon after but continued to take Echinacea and the staph infection never returned.

The second case study is of a young woman who suffered with mononucleosis which caused her to always feel depressed and fatigued. Doctors were unable to prescribe any drugs to aid in her battle against mononucleosis. So she decided to take Echinacea drops and after 2 weeks reported overwhelming improvement in her symptoms.

Have you ever been told coconut oil is bad? Well don’t believe it because people from the Philippines call the coconut palm tree, the ‘tree of life’ as it is treasured for its plant-based fats that provide many benefits including energy. Coconut oil is extracted from the delicious white meat of coconuts.

It is high in saturated fat and rare medium chain triglycerides. It contains lauric acid which our bodies convert into monolaurin which is a potent and natural antibiotic. Monolaurin is also found naturally in breast milk, so if it’s safe for babies then it is definitely safe for us! Research has proven that taking coconut oil regularly is useful for protecting oneself against bacterial infections.

It has also been found that when directly applied coconut oil can fight against skin infections and even acne. So if you are taking antibiotics for your acne, try using coconut oil instead by ingesting it and as a completely natural moisturizer. Another study discovered that caprylic acid and monocaprylin, components found in coconut oil could be a worthy natural alternative for antibiotics in treating bovine mastitis.

Did you know that ancient Greek & Roman brides & groom were crowned with fresh oregano as decorative fashion statement? Apparently they recognized oregano for its aroma and used it as a symbol of joy and happiness. In Austria it is traditionally used to treat infections of the intestines, nervous system and respiratory tract. Even the great Hippocrates used oregano as an effective antiseptic.

You may know oregano as an important culinary herb that makes food delicious! But you ought to know that this particular herb also has very powerful antibiotic effects. Oregano contains the chemical components thymol and carvacrol which have been shown to inhibit growth of food-borne pathogens. Researchers have also found that oregano is highly effective against the intestinal infection ‘Giardia Lamblia’; even more effective than the standard prescription drug that is commonly used for Giardia.

Oregano is also useful if you have contracted the common cold and the flu as it has been proven to have antiviral activity. It is recommended that you take antibiotics with food to prevent any nausea that may occur due to the powerful effects.

Besides these 6 natural antibiotics you should eat, there is a more potent source of natural antibiotics which have proven to heal the body and boost the immune system. You can go to the next page and watch this presentation on ‘The Elixir Of Life That You Are Missing Out‘.

Which wonderful friends in your life would appreciate this information about natural antibiotics?