12 Contaminated Fish You Should Never Eat 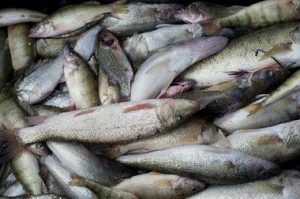 There are plenty of fish in the sea, and that’s why it should come as no surprise that (eating) some of them is good for your health and others can be completely toxic. The important thing is to know which fish is which. There are certain fish that you should avoid eating at all costs.

The right fish are high in Omega 3 fatty acids – a nutrient that is essential for the functioning of your brain. Fish is also high in protein and extremely low in fat. But that doesn’t mean that you should eat every fish on offer.

What’s more is that because of all the pollution being pumped into our oceans, lots of fish is contaminated with fossil fuel emissions, heavy metals, and mercury. Low level mercury poisoning is such a threat to developing unborn babies that it’s advised that pregnant mothers avoid seafood entirely for the duration of their pregnancy.

Swordfish is a popular dish at many seafood establishments. Unfortunately, it is also known for absorbing high levels of mercury from the environment it swims in. The Environmental Protection Agency has suggested that women and children never eat swordfish at all.

This is another mercury poisoning candidate. Although American officials previously believed that this predatory fish is safe because it swims in deeper waters, it has been found that mercury levels are high in King Mackerel. Because mercury builds up in the body over time, and because this is a fish a that can live a long time and grow quite large, it has plenty of time to build up poisonous levels of mercury from industrial waste, which all eventually finds its way into the sea.

If the King Mackerel is smaller than 33 inches long, then it is probably not old enough to have built up a high mercury level yet – and may be safe to eat.

Tilapia is a fish which has become popular due to the ease with which it can be farmed. Unfortunately eating tilapia has been equated to being “As bad for your health as eating bacon”. According to the American Dietic Association, farmed fish like tilapia cause high inflammation in those that eat them regularly.

Tilapia contains very low levels of the healthy brain food Omega 3 fatty acids. It does, however, contain high levels of Omega 6 fatty acids – which are known for upping inflammatory conditions. This ratio of high Omega 6 and low Omega 3 oils causes inflammation which poses health risks for anyone with heart conditions, asthmatic symptoms, arthritis, allergies, or any other autoimmune disorders. To put it in perspective, bacon and doughnuts have lower levels of harmful long chain omega 6 than tilapia do.

You may know this fish as silver eel or yellow eel. It is another popular dish, especially at sushi restaurants. Eel is another fish which grows slowly and lives long. Which means that it has plenty of time to absorb toxic contaminants like PCBs, mercury and flame retardants – all of which are found in scary high levels in the rivers where eels sometimes like to roam inland. This fish is so contaminated that even grown men are not supposed to eat more than one a year.

To start off with – 25% of shrimp samples labelled “wild” were found to be farm raised. So it is safe to assume that most shrimp offered in restaurants is going to be imported farm shrimp and will fall under this category.

Aside from the fact that vast numbers of people are allergic to shell fish, or develop fatally dangerous allergies to them, shrimp have their own bad reputation. Shrimp sellers add a food additive called 4-hexylresorcinol to shrimp to make them maintain their colour. This additive has an estrogen like effect on the human body – causing higher incidents of breast cancer in women and a lower sperm count in men.

It was also discovered by AP investigators that shrimp in Thailand are peeled by slave labour. This shrimp manages to make its around the world to countries where the idea of slave labour is abhorrent. These same farms also use pesticides which are banned in first world countries.

One of these is a neurotoxic organophosphate called Malachite Green, which has been linked with tremors, memory problems and  ADHD.

Another nasty chemical in farmed shrimp is rotenone. This is used to kill other living things from the farm ponds before the shrimp are introduced. It is connected to Parkinson’s disease.

Tilefish are another long living predatory fish that have too much time to absorb mercury and other heavy metals from the water. There are many varieties, but the EPA does not distinguish which are the most highly contaminated.  Instead they advise that children, women, and especially pregnant women avoid eating it all together.

Also known in South Africa as the “deep sea perch”, is a fish that can live up to 150 years. An adult large enough for consumption will usually be about 40 years old. They are on the almost endangered species list – so you shouldn’t be eating them anyway. As with the other long living fish – they are able to accumulate huge amounts of mercury in their bodies.

Eating this fish puts you in very real danger of mercury poisoning. To make it an even less appetizing choice – they have low levels of omega 3 fatty acids in them. On all accounts, you should simply choose a different fish.

The Blue fish is a sad case, because it should be really good for you. It is high in omega 3 fatty acids, high in protein and low in other fats. Unfortunately it is on the high contamination list. Blue fish have been found to be packed with deadly toxic chemicals from agricultural run-off. These include pesticides, PCBs and mercury.

This unfortunate fish is often the subject of “seafood fraud”(there really is such a thing). Many restaurants sell Pangasius as Grouper, probably without even knowing it. Other alternative fish that are sold as Grouper are King Mackerel (already mentioned on this list) and whitefin weakfish.

And if you do get genuine Grouper? It is another candidate for high mercury levels – and you should avoid it in any case.

As with Grouper, more often than not when you see this fish on the menu what you are usually getting is Pangasius (A fish raised in filthy conditions). Pangasius is known for being contaminated with vibriobacteria – a horrible microbe that is responsible for most shellfish poisoning.

The farming methods used to cultivate these fish in Vietnam are not only destroying the environment, they also have fish living in toxic waste and filth. The only way they can breed and survive is to be fed all kinds of antibiotics, chemical pesticides and even disinfectants.

These all get stored inside the body of the fish itself before it is shipped to your plate. The antibiotic alone have been banned by the World Health Organisation, because it not only feeds humans with antibiotics, it also encourages the development of super-strains of bacterial illnesses.

Last but not least (we promised plenty of fish in the sea) is farmed salmon. We saved the salmon for last because it is one of the worst, and most popular, fish on the menu. If you see the words “Atlantic Salmon” it is probably farmed. This fish is farmed in an environment that leaves it riddled with pesticides, parasites, bacteria and even feces.

Farmed salmon is known for upping inflammation in consumers. It has also been found to have less and less Omega 3 fatty acids in it year after year. This is because they are not being fed their natural diet.

Farmed salmon was tested by the University of New York, who found that it has dioxin levels which are eleven times higher than in wild salmon. Dioxin is a chemical pollutant which is stored in your (and the fishes) fat cells. It can cause cancer, immune system issues and organ damage.

What’s more is that farmed salmon have been linked with increased metabolic syndrome and type 2 diabetes. Other substances commonly found in farmed salmon include PCBs and organochlorine pesticides.

To protect yourself from detrimental effects of these fish, go to the next page and find out how you can boost your immune system –

Which wonderful friends in your life would appreciate this information about these contaminated fish to avoid?