Why You Should Avoid Eating Pork

It may come as a surprise how numerous religions and beliefs worldwide discourage or even outright ban the consumption of pork. The Bible (Leviticus 11:3) refers to pigs as “unclean,” while those of Jewish and Muslim faith are known to avoid eating pork entirely. However, regardless of whatever religion or beliefs one may abide by, there exist real, practical, and scientific reasons as to why people should steer clear of eating pork.

Life on the Farm 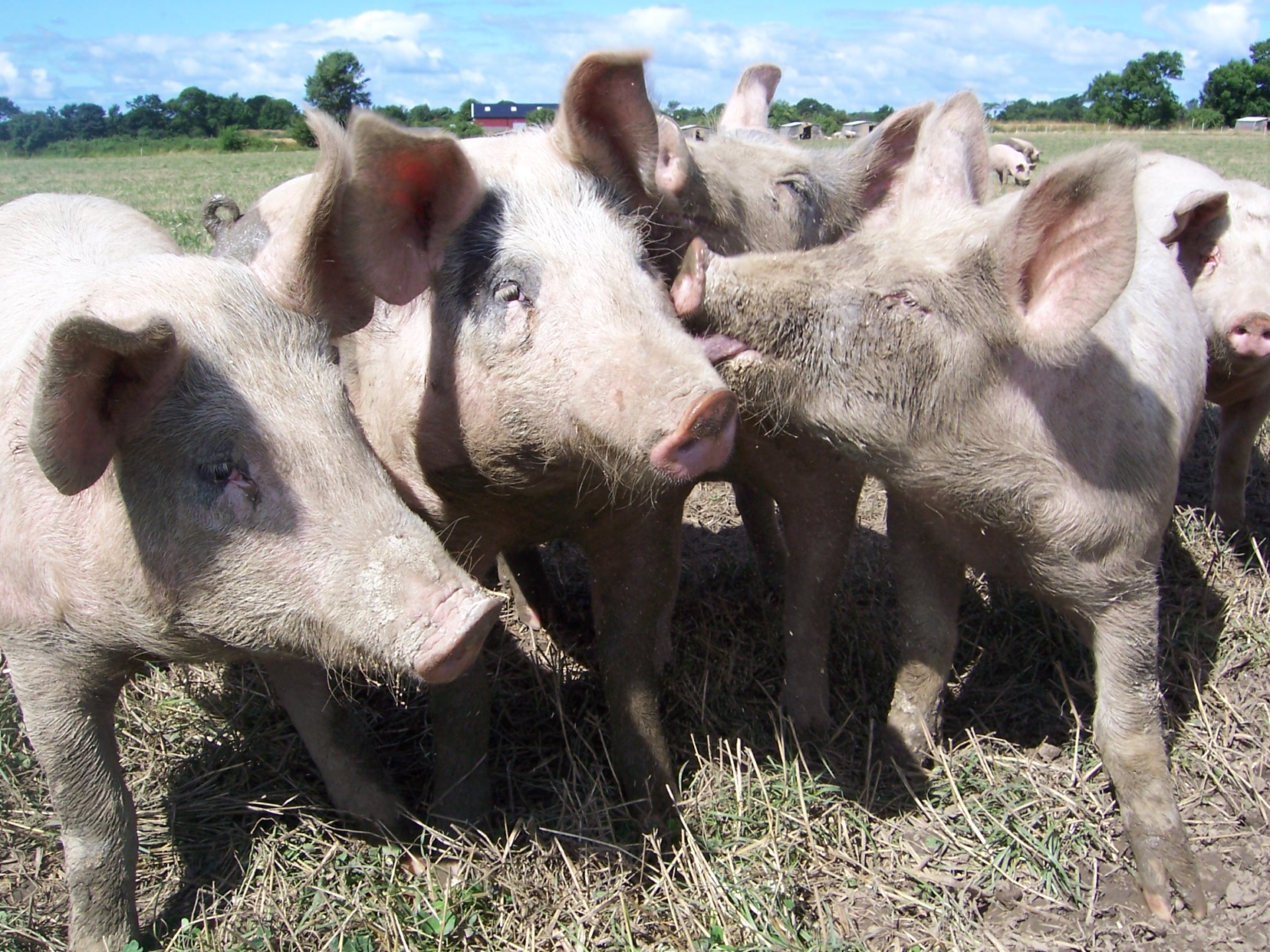 Realizing why pork can be bad for your body and its health can become easily obvious when you witness pigs in their natural, unfiltered element. Pigs are often found in unsanitary, if not outright filthy, conditions, living in any combination of dirt, mud, insects, waste and other unfavorable surroundings.

Pigs are also known to enjoy rolling in mud, partly in an effort to cool their body down due to the absence of sweat glands in their body (an important fact that contributes to the unhealthiness of pigs, which will be expounded upon later). Interestingly enough, dirty water and mud can be considered as the “clean” alternative to cooling the body down, because if a pig does not have access to these cooling instruments, it will often be forced to wallow and cool itself in its own waste and excrement. It is no surprise that the pens that pigs live in, better known as a “pigsties,” always refer to places that are unsanitary, unhealthy, and smell unfavorably.

Aside from living in rather dirty surroundings, pigs also have quite unhealthy diets. Pigs are known as the “scavengers” among the farm animals, and will eat whatever they have access to. Though it is true that farmers will provide pigs with their own grain and pig feed, this does not stop the pigs from eating any possibly harmful and unclean substance that can be easily found on a farm.

Such substances may include things such as excess or rotting food left behind by other animals, insects and bugs found on the farm, and, unfortunately, even the feces that animals just leave behind, including their own waste. The extent of what pigs eat stretches so greatly that they will even eat the decomposing bodies of dead animals, even if the animals had died from sickness and disease.

The indiscriminate eating habits of the regular pig wouldn’t be so bad, in fact, if pigs would at least be able to properly digest and filter away all of the toxins, bacteria, and other unhealthy components found in what they eat.  Regrettably, this, however, is not the case. In fact, it is almost the complete opposite, due to the fact that pigs actually have really simple, almost inadequate, digestive systems. As compared to a cow for example, an animal which can take up to a whole day to digest what it has eaten, a pig will digest its food in a matter of a few hours.

This presents a problem because the digestive process is expected to allow the body to filter and rid itself of any unhealthy components that can be found in food that is eaten, before the food is processed and more fully incorporated into the body. This means that the bacteria and other toxins that are constantly present in a pig’s surroundings and what it eats are relatively left untouched and unfiltered even as they become part of the pig’s body system. This undesirable state of affairs is made worse by the aforementioned fact that pigs are not able to sweat. Sweating is one of the ways in which a body can rid itself of unnecessary toxins. A pig’s inability to sweat signifies that, most likely, the pork that we eat would contain an appallingly high presence of chemicals, toxins, and bacteria.

Pork in Your Digestive System

Even if, for the sake of an argument, pigs are raised in a completely sanitary environment, eat only the proper food that pigs are meant to eat, do not have to cool themselves from the heat by wallowing in mud, and are, in addition, generally thoroughly supervised and inspected during the entirety of its life, one can still not avoid the fact that the pork that pigs provide is still teaming with numerous unhealthy and toxic substances that will negatively affect your body if consumed.

Often, the body will already be given enough of Omega 6 Fatty Acids through a regular, pork-free diet, and pork will usually tip the scale too heavily. An excess of Omega 6 Fatty Acids will result in inflammation in our body, which can lead to obesity, cardiovascular diseases, Type 2 diabetes, arthritis, and liver disease. All in all, though Omega 6 Fatty Acids are good for your body, the amount that regular servings of pork in your diet provide will often result in more bad than good.

Aside from the possibly excessive amounts of Omega 6 Fatty Acids already found in pork, the act of processing and preserving pork is often aided by unhealthy chemicals and substances that can have an adverse affect on your body as well. One of the main components used in processing pork is sodium nitrate which, among other things, is used to give pork that deep red color, making the pork look fresher than it actually is.

However, these nitrates, which also become nitrosamines, have been known to be linked to an increased risk of developing cancer. The list of processed pork includes bacon, smoked ham, beef jerky, hot dogs, and other foods that have, unfortunately, become favorites and staples of many diets and meals. However, it becomes less difficult to give up these foods when you realize that in exchange for eliminating or reducing processed pork from your diet, you sharply decrease the risk of getting pancreatic, colorectal, and stomach cancer, among other types of cancer. To make the decision even easier, relinquishing processed pork from your diet also means that you greatly reduce the risk of suffering from obesity, cardiovascular disease, and diabetes.

With all of the evidence pointing to the fact that processed pork is bad for your body, a person who still insists on eating pork would think that fresh pork should be the way to go. Unfortunately, pork lovers aren’t going to catch a break with this one either, because even fresh pork has been documented to be just as unhealthy, and sometimes even worse, than processed pork. As mentioned earlier, the inadequate ability of pigs to digest its food and filter toxins from its body causes its body to act as a sort of breeding ground for viruses and bacteria, and this is even more true in the case of fresh pork. This is due to the fact that a certain pathogen that acts as a catalyst to numerous diseases is commonly found in fresh pork.

It is worth mentioning that all of these issues with eating pork already grant the assumption that the pork was cooked correctly and properly. Nevertheless, even when pork is adequately cooked, it is still difficult to ensure that most of the bacteria and pathogens found in it have been removed or rendered harmless. When pork is undercooked, there is the risk of acquiring a major illness called “trichinosis.” Trichinosis is an infection that can be acquired through eating undercooked pork that is host to trichina worm larvae.

Some of the symptoms of trichinosis include headaches, diarrhea, fever, nausea, vomiting, joint and muscle pain, and problems with breathing, all of which can go on for at least a few weeks. On the other hand, one also runs a risk of illness when overcooking pork, because exposing the meat to a temperature that is too high can result in the production of heterocyclic amines, which are also linked to the occurrence of cancer.

With all of the various and different sicknesses, diseases, and conditions that have already been mentioned, one should be able to come to the conclusion that eating pork is just not good for your health. Not only do pigs have numerous viruses and bacteria already naturally present in their body, they are also very vulnerable to getting other diseases and sicknesses from other animals.

The fact of the matter is that pigs have become very unwitting yet very able carriers of disease, so much so that these little pigs can actually create a global panic and pandemic. Only a few years ago, the world was rocked with the Swine Flu Pandemic, better known as the H1N1 of 2009. Though a vaccine for Swine Flu has been developed and the virus has been contained, the pandemic it caused just goes to demonstrate how unhealthy and possibly even deadly pigs can be. Other illnesses that pigs have been known to carry include the Hepatitis E virus, the Menangle virus, and the Nipah virus.

Now that you are well-informed, perhaps you will take the wise course and fittingly restrain yourself from, pardon the pun, “pigging out.”

If you find this article about pork useful, you can go to the next page and watch about the 4 Foods to Never Eat for Breakfast –

Which wonderful friends in your life would appreciate this information about Pork?