What Really Goes Into a Jar Of Nutella? 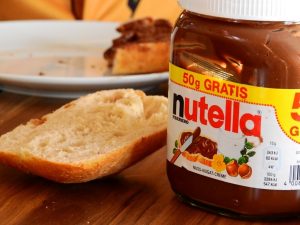 With the release of Nutella inspired foodie treats like Nutella filled cronuts and fried wontons, this sweet chocolatey hazelnut spread is no stranger in the average household cabinet.

Nutella is consumed so often that the weight of consumption over a year is approximately the size of the Empire State Building.

However, Nutella hasn’t always had the following it holds today.

It’s rise to fame started as a humble endeavor to create a chocolate confection that was accessible to everyone.

Solidified hazelnut chocolate was made and became available to the average consumer in Italy.

This eventually got made into a spread and turned into what the world knows today as Nutella.

Nutella was and still is wildly successful and can be found in every grocery store.

Recently, the rise in popularity of Nutella has garnered a cult-like following.

Millennial and foodies alike are praising Nutella and incorporating it into their daily diet.

While the mix of chocolate and hazelnut is undeniably delicious, your Nutella spread may not contain as much of these ingredients as you think.

Nutella may taste great on your bread, or with crackers and pretzels, but in reality, it should be eaten just like a candy bar.

What Are the Ingredients? 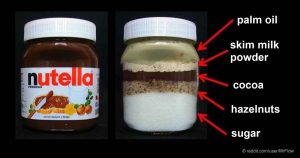 If the back of the Nutella jar tells a consumer anything, it’s that the jar is made up of sugar, palm oil, hazelnuts, skim milk, cocoa solids, soy lecithin, and vanillin.

These ingredients are in descending order, meaning the first ingredient is what Nutella contains the most of.

Unfortunately, this ingredient is sugar. Nutella’s sugar content is extremely high, over half of each jar is made up of sugar.

This is far from what the advertisements would like people to believe is a healthier alternative to other spreads.

Sugar is linked to cancer, obesity, and other issues like spikes in glucose and insulin resistance.

If you eat a tablespoon of Nutella, you’re eating almost two teaspoons of straight sugar.

The next largest ingredient in Nutella is palm oil. Palm oil gives Nutella its creamy texture and makes the spread smooth and spreadable.

Many health issues can arise from the regular consumption of palm oil as it was deemed more carcinogenic than any other oil.

While it may not be true that eating Nutella can cause cancer, the palm oil used in Nutella are heavily processed.

However, palm oil is one of the cheapest oil available for manufacturers.

If Nutella changed the palm oil in their spreads to a healthier option, it would cost them tens of millions of dollars a year. Palm oil is also one of the least sustainable oil sources.

The rising demand for palm oil has caused tropical forests to be cleared away to make room for the mass planting of palm trees.

Clearing away these tropical forests leads to a change in the ecosystem of many critically endangered animals like elephants and tigers, among many others.

While hazelnuts, and cocoa solids, which is just cocoa powder, aren’t bad ingredients, the percentage of each of these is quite slim.

When eating Nutella, advertisements say it is a hazelnut spread with a hint of cocoa. Nutella is comprised of only 13% hazelnuts and less than 8% cocoa.

The majority of what is used as a spread worldwide is sugar and palm oil.

The remaining ingredients are soy lecithin and vanillin. Soy lecithin is an emulsifier. It keeps all the ingredients from separating, which gives the spread it’s long shelf life.

Vanillin is an artificial flavor that tastes like vanilla beans.

The problem with Nutella is it is a wolf in sheep’s clothing. It is marketed as part of a balanced diet and leads consumers to believe that this hazelnut spread is made with wholesome ingredients.

A healthy and balanced spread should not include a spread that is 75% sugar and palm oil.

These two ingredients can be detrimental to the human body when consumed regularly.

If you haven’t tried Nutella thus far, you haven’t missed out on much. However, if you are a die-hard Nutella fan, there are tastier alternatives you can use that won’t wreak havoc on the environment and your health.

A healthier alternative to Nutella is making your own chocolate hazelnut spread at home.

With just a few ingredients, you can have a spread that tastes great with no palm oil and a lot less sugar.

With hazelnuts, cocoa powder, milk, maple syrup, and a small amount of olive oil or coconut oil, you get a healthy Nutella-like spread that tastes great and isn’t bad for you.

If you are not comfortable with making your Nutella at home, look toward getting a chocolate hazelnut spread that is made with wholesome organic ingredients.

It may be a bit more expensive, but it will also be a lot healthier.

While Nutella tastes great, the amount of sugar and palm oil in each bite is damaging your health more than you could imagine.

A chocolate and hazelnut combination should be consumed in a healthier and more sustainable way to make your body and the environment better.

If you love Nutella-like spreads but is concerned about its effects, feel free to make your own at home as you can find tons of alternative recipes with wholesome organic ingredients which will be a lot more healthier.

As labor day is just round the corner, we have worked with Holistic Labs for a HUGE promotion for you to get Elixir Greens at a ridiculously low price. Check it out in the next page –

What is your favorite spread?

Please share with your friends this article on the Nutella – Use any of the social media and email buttons on the left of our website.