Unsafe Preservative (TBHQ) in Your Food 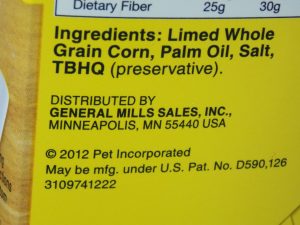 Have you noticed that as our food industry grows, so does chronic non communicable diseases? Food allergies are at an all time high especially in our children.

We would love to believe that the advancements in technology would lead to the healing of our nation rather than its deterioration, but this is not necessarily the case when it comes to food additives.

Have you ever seen this on the list of ingredients?

TBHQ is a food additive that is used to protect against deterioration caused by oxidation, such as fat rancidity and colour change; basically it is added to food to improve its shelf life.

Due to this characteristic, TBHQ is considered an antioxidant. Antioxidant…

Sounds natural and healthy right? Well, not in this case as TBHQ is synthetic and made in labs.

If it contains fats and oils, is processed and have a long shelf life, there might be TBHQ in it. Here is a list of foods and brands that contain TBHQ:

Research has shown that when it comes to TBHQ, it has adverse effects on humans’ health. Here is a list of adverse reactions humans have to TBHQ:

Studies have also shown that chronic exposure to TBHQ may induce carcinogenicity. In addition, a study by Cheryl Rockwell, an assistant professor of pharmacology and toxicology at Michigan State University, has shown that the consumption of TBHQ triggers an allergic reaction in persons that have consumed it.

What the research shows is that TBHQ triggers a negative response in our T-cells. T cells are generally used to fight infections.

Due to the adverse effects TBHQ causes on humans, it is banned in Japan, United Kingdom and other European countries.

However, in the United States, the Food and Drug Administration (FDA) has given the green light on its use.

There is however, a limitation to the amounts used – 0.02% of oils in the product.

Though the recommended usage in food production is relatively low, the fact that it is used in so many processed foods increase our risk, especially that of our children, in developing these condition; the fact we are so busy, and processed foods make our lives so much easier, it is easy to surpass the average daily intake of 0-0.7 mg/kg of body weight per day.

What can we do to avoid TBHQ in our diets?

Here are 3 tips on how to avoid TBHQ consumption:

To protect yourself from detrimental effects of TBHQ and other dangerous additives, learn about how to use the #1 nutrient that we’ve been throwing in the trash.

Do you eat any foods containing TBHQ? Check your packaged food and share with us if there’s any TBHQ in it.