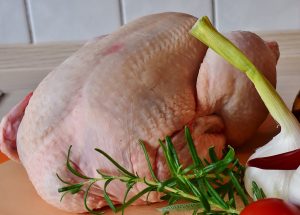 Pelvic pain, burning with urination and frequent urge to urinate are familiar symptoms for those who have suffered from urinary tract infections (UTIs) at least once in their life.

These conditions are unfortunately very common as every year millions of people, mostly women, suffer from them worldwide.

It has been known for many years that these infections are mainly caused by the movement of fecal bacteria from the rectum to the urethra.

However, only recently researchers have identified the most likely external source of contamination: chicken.

A study from the University of California, Berkeley, and the U.S. Centers for Disease Control and Prevention found significant evidence of this after comparing the strains of bacteria E. coli from chicken meat samples in Northern California and those from the urine of UTIs patients at a health center in the same region between September 2016 and May 2017.

Researchers discovered that 32% of the chicken samples and 14% of the turkey samples contained bacterial strains identical to those of UTI patients.

For some reason, similar analyses on other types of meat industries did not lead to the same results.

UTIs can therefore be considered an animal-to-human disease, just like swine flu or mad cow.

In fact, it appears that bacteria from poultry farms are able to migrate to humans through the production and consumption of chicken meat.

A very alarming discovery is that in the US approximately 10% of recorded cases of UTIs are resistant to all existing antibiotics.

This means that every year 800,000 cases of UTIs in the country cannot be treated with the usual antibiotic prophylaxis. In these cases, it becomes very difficult to prevent the migration of bacteria from the urinary tract to the kidneys and then to the bloodstream.

UTIs that cannot be treated with antibiotics can therefore progress to a systemic disease that may potentially become deadly.

Why Poultry Products are linked to Drug Resistant UTI’s

But let’s go one step back: why do chickens develop such a high concentration of bacteria? The answer to this question is to be found in the conditions in which farmed chicken are raised.

Most chickens in the US are raised in concentrated animal feeding operations (CAFOs).

In these facilities, a high number of animals share very limited space, often in a highly unhygienic and unhealthy environment. This creates the perfect habitat for bacteria such as E.coli to proliferate.

The high likelihood of infectious diseases spreading among the animals in intensive livestock farms is seen by the industry as a serious threat as it could result in loss of profit.

In these conditions, the systematic use of antibiotics is seen as a cost-effective way to keep production going despite the considerable risks for public health associated with this practice.

Another reason why antibiotics are so popular in the meat industry is that they are also able to accelerate the growth of farmed animals and therefore the production pace.

It is estimated that around 80% of antibiotics in the US are used in livestock farming.

It is therefore not surprising that the massive use of antibiotics – together with the high animal concentration and the lack of hygiene in many CAFOs – have also contributed to the development of new, stronger bacteria resistant to all existing antibiotics.

This phenomenon is known as “panresistance”.

A good example of how resistant bacteria develop in livestock farms are E. coli bacteria carrying the mutated mcr-1 gene.

The gene was first discovered in China in 2015 and was found to be resistant to colistin, a last-resort antibiotic rarely used in people due to its severe side effects.

However, this drug has been largely used in livestock farming for decades, where most likely the mutated gene mcr-1 developed.

Less than one year after its discovery, the mutated gene had already spread to several other countries, including the US.

The phenomenon of resistant bacteria was already emphasized in 2013 by the U.S. Centers for Disease Control and Prevention in its report “Antibiotic Resistance Threats in the Unites States”.

At the time, 18 resistant bacteria were defined as “urgent, serious and concerning threats” to people.

So, bacteria can easily migrate from farmed chicken to the people who eat their meat.

However, it is important to know that this is not the only way in which bacterial infections can be transmitted from chickens to humans.

People who do not eat these animals can be infected as well.

For example, flies are also able to transport the bacteria from poultry farms to cities.

Similarly, soil contaminated with toxic sewage wastes can be the source of contamination from farms to humans.

Those who do not consume chicken products can therefore still suffer from panresistant bacteria created by the poultry industry.

Why it is important to prevent UTIs

The statistics about UTIs indicate that every year in the world between 130 and 175 million people suffer from this condition.

In the US alone, the average yearly cost of uncomplicated UTIs is above 1 billion dollars.

Yet, the most disturbing aspect of this situation is the creation of panresistant bacteria causing infections that can no longer be easily treated with antibiotics.

This means that UTIs are changing from a common, easily treatable condition to a potentially life-threatening one.

Furthermore, some experts indicate that the creation of panresistant bacteria is likely to become one of the biggest challenges to public health in the near future.

Not only UTIs, but also other common diseases that nowadays can be treated with simple antibiotic prophylaxis may become incurable in the future.

How to avoid UTI’s from Chicken Meat

For those who eat chicken, it is important to follow strict hygiene practices in the kitchen when preparing it to avoid contamination from bacteria such as E.coli.

First of all, it is important to wash hands thoroughly before and after touching raw meat.

According to the World Health Organization (WHO), hands should be washed for at least 20-30 seconds making sure not to forget to rub under the nails and between the fingers.

The meat should also be carefully washed and cooked at an internal temperature of at least 165 F.

All the utensils used to prepare the meat, including the chopping board and the knives, should be washed immediately and not used to cut any other ingredients.

In fact, a common mistake such as using the same chopping board for meat and raw vegetables can have serious consequences and increase the chances of spreading an infectious disease at home.

It is interesting to note that the use of hypochlorite was found to be effective to avoid contamination from Salmonella and Campylobacter, as outlined in the study “The effectiveness of hygiene procedures for prevention of cross-contamination from chicken carcasses in the domestic kitchen”, carried out by the PHLS Food Microbiology Research Unit from Exeter in the UK.

Also, the problem of flies should not be underestimated, as evidence suggests that they are able to carry bacteria from different sources to food and humans.

Contact between these insects and food should therefore be avoided.

An effective way to prevent contamination from flies is to make sure food is always covered properly or placed in the fridge, especially in warm weather.

UTIs are a common disease that is becoming increasingly worrying due to the phenomenon of panresistant bacteria that can transform this condition into a potentially life-threatening one.

It is therefore important to take action to prevent UTIs.

To reduce risk exposure, a possible solution could be to decrease the consumption of chicken meat from intensive farming to no more than once every few weeks.

Opting for chicken from organic, antibiotic-free or free-range farms would be a better alternative as conditions in these farms are generally better and antibiotic-resistant infections are less likely.

Not eating chicken meat at all would be an effective solution as well, as it would minimize the chances of direct contamination from meat.

For those who cook chicken at home, it is necessary to adhere strictly to the hygiene practices described in this article.

If you are suffering from bladder infection or urinary tract infection, go to the next page and discover how to cure UTIs naturally without antibiotics –

How often do you eat chicken? Where do you get your chicken from?

Please share with your friends this article on “Chicken Meat?” – Use any of the social media and email buttons on the left of our website.