September 8, 2017 by staff content in Health News with 5 Comments 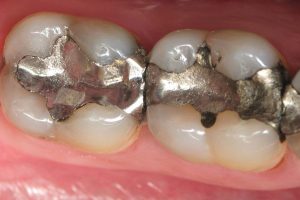 When you or your loved ones get a cavity, the dentist fills it with amalgam or composite resin.

You have the choice between a silver filling, amalgam, or the white composite resin made from plastic and glass.

While many have chosen to go with the tooth-colored composite resin, amalgam fillings still account for half of all dental fillings.

It is well known that mercury should not be handled regularly and that any amount of mercury is unsafe for our bodies.

However, amalgam fillings are made up of 50% mercury and are still used daily.

Whether insurance companies won’t cover composite resin or the amalgam filling is cheaper, millions of people are poisoning themselves daily when they get a cavity filled.

What Are Mercury Dental Fillings?

Amalgam fillings have been around for over 150 years. They are silver in color and combine mercury with other metals like silver and tin to create a long lasting dental filling.

These fillings are used when tooth decay causes cavities. These fillings have been found to be questionable in their safety when researched because of the potentially toxic levels of mercury they contain.

While the ADA claims that the mercury in these tooth fillings is safe because it is bound with other metals, researchers have found that even small amounts of mercury can cause toxicity.

The most vulnerable people are young children and pregnant women. Young children can become sick from very small amounts of mercury.

Just one dental filling in children under six could cause potentially harmful effects.

As far as pregnant women go, research has found a correlation between dental fillings and mercury in the cord blood of their fetus.

For the average healthy person, mercury dental fillings may not cause as harmful effects as they do to children and pregnant women.

However, it should be noted that the effects could still present themselves.

Mercury causes harms to our body by binding to sulfur groups.

Sulfur is needed in our body for biochemical processes and is essential for our life.

Mercury binds with sulfur, causing harm by decreasing the amount of good sulfur our body can use.

This increases inflammation and free radicals in our body.

What Harm Do Mercury Dental Fillings Cause?

The problem with mercury dental fillings is that the mercury can leak from the filling.

While it may be a small amount of mercury, researchers have found that no level of mercury is safe for our bodies.

This small amount of mercury leaks everyday each time you eat, drink, and breathe in through your mouth.

The mercury is leeched into the body and can cause an extensive amount of bodily harm.

The more mercury dental fillings a person has, the more toxic mercury leaks into their body.

Mercury dental fillings come with a long list of side effects. If you have amalgam fillings, you could have mercury toxicity.

Mercury toxicity can occur whenever an individual is exposed to mercury. The more mercury they come in contact with, the more severe the symptoms can be.

People with mercury toxicity may feel tired all the time and feel like they are living in a fog.

Besides mercury toxicity, amalgam fillings can cause many side effects or illnesses later on.

People with previous kidney or neurological problems should avoid mercury dental fillings completely because mercury can be very damaging to the brain and is released through urine.

Mercury is also a known carcinogen, meaning that it increases a person’s risk of getting cancer later in life.

Diseases like ulcerative colitis, irritable bowel syndrome, leaky gut syndrome, and Crohn’s disease have all been linked to high levels of mercury.

Mercury is best to avoid on a daily basis. The number of chronic diseases it is linked to is rising as more research comes out.

While some mercury is impossible to avoid, dental amalgam fillings are the cause of many mercury poisonings in people across the world.

Amalgam fillings don’t just stop in your mouth. Mercury is flooded into the environment from making and dealing with these amalgam fillings.

The mercury ends up in our lakes, rivers, and oceans causing high spikes of mercury in fish and other animals.

Mercury containing dental fillings are harmful to our health. If you are concerned about the amalgam fillings you already have, it may be best to keep them.

Research has shown that removing these fillings can cause a greater release of mercury in the body.

However, if you or your loved ones need a new filling, there are better alternatives than traditional amalgam.

Composite resin is tooth colored and can last just as long as an amalgam filling.

Other dentists will also use porcelain and gold materials to stop tooth decay and restructure your teeth.

While amalgam is the fastest way to repair a cavity, the potentially harmful levels of mercury are cause for concern.

Before you get a new filling, talk to your dentist about alternatives to the traditional amalgam filling.

It is much better to pay a little more money and get a filling that doesn’t contain mercury.

Mercury is one of the deadly toxins that increase your risk of many diseases. Go to the next page and & learn how you can protect your body from these deadly toxins –

Do you have any dental fillings?

Please share with your friends this article on the Mercury Dental Fillings – Use any of the social media and email buttons on the left of our website.